It has to be said few bands manage to ignite that primal passion and excitement which borders on lust but to the list of those who have for us here, we can eagerly add Swedish noise twisters Borg 64. The band and their Anywhere But Here EP are just sensational, a tour de force which captures, chains up, and smashes the senses and heart with furious rampant psychotic ingenuity.

From Luleå, the trio of Sven Engdahl Hamilton, Fredrik Johansson, and Markus Wanler conjure antagonistic confrontations which devour the listener with rabid hunger whilst searing them with delicious addictive sonic invention and startling imagination. Originally a political drum n bass act which began in the late 90s, Borg 64 evolved into their own unique furnace of hardcore punk and electronic whipping. The band had two critically acclaimed releases on the now defunct Codebreaker Records but now return after a seven year hiatus stronger, more violent, and irresistibly virulent than ever before.

Released on Discouraged Records, Anywhere But Here snarls and chews on the senses and world through a quartet of 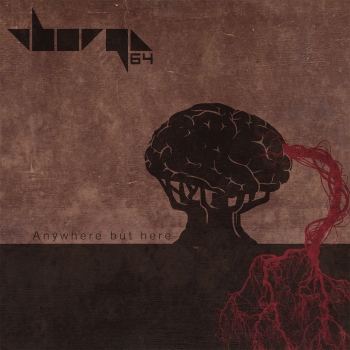 uncompromising annihilatory blistering furies. From the initial electro fizz of opener Death To False Power Chords soon accompanied by a hellacious attack of crippling beats, the track is an immediate hook which has thoughts and emotions secured upon its vicious barbs. Into its stride the song is an unbridled abrasion of squalling vocals, deeply rummaging riffs, and intrusive incendiary electronics as contagious as they are wantonly seductive. The track, as the whole release, is a schizophrenic riot of vision and passion, its course twisting and winding tighter around the ear with delicious predatory basslines, caustic electro spite, and ruinous vocal fervour.

Late Nights At Quarks takes over from the stunning start to trash out greater heights and compulsive insidiousness, its vindictive rhythms and bass savagery complimented by sinister venomous sonic lashes and malevolence. The song is an exquisite but ferocious spear of inciting and intrusive invention which leaves greedy rapture in its aggressive wash. The following Judge Jury Executioner Talkshow Host is an equally intensive continuation of intent and sonic mastery with just as rich rewards and results for the listener. Once more the electro and viciousness of the band combine for a tsunami of rampaging invention and corrosive magnificence.

The staggering EP is completed by Luleå, a track surging with mischievous addiction forming hooks and synapse burning melodic poison which leaves one basking in its irrepressible heart and magnetic invention. The track is merciless as it erodes and enflames the passions whilst chewing with raptorial fervidness on the senses from first nasty and wonderful note to last.

Imagine a crazed mix of Converge, Enter Shikari, Kabul Golf Club, and Coilguns and you come near to the excellence of Borg 64 and their Anywhere But Here EP, though all suggestions are still off from their quite triumphant skilled and distinct discordance.