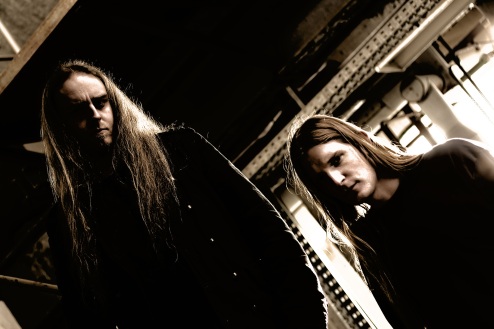 Though wrung through with not predictable but arguably sounds which you would almost expect from any accomplished black metal release, Monument in Black from German metallers Sonic Reign still has a swagger and presence about it which makes it stand out for a sure and richly pleasing encounter. It is an album which from start to finish firmly holds the attention with sounds that at times do feel familiar but laced with a tasty helping of imagination and energetic invention which is hard to dismiss. The term black n roll has been bandied around recently and it is a tag which fits this album perfectly.

Released on Apostasy Records, Monument in Black follows Raw Dark Pure of 2006, an album which gained further success upon its re-release via Metal Blade Records the following year. The album had enough to mark the band as a strong emerging force but now with the release of the new album though still without doubt a very decent album pales against the strides the band has taken with their new release. Consisting of Ben Borucki (vocals, guitars) and Sebastian Schneider (drums), the Trier and Mellrichstadt based duo has created a full blooded intensive confrontation which triggers a strong satisfaction. It is again like its predecessor seemingly heavily influenced by Satyricon, not a bad thing obviously, but it does cloud their own distinct voice for the only real niggle you can place upon the band and album, their own unique breath and presence still to step fully forward though there are of numerous signs on the release that it is coming.

It has to be said though that opening track Abhorrence Vs. Scum was all it took for the album to make the fullest persuasion that

it was to be a lingering and quite magnetic pleasure, the immediate sizzling groove and thumping rhythms an instant contagion from which escape was futile. The track rampages as its muscles flay the ear and riffs alongside a sonic lashing welcomingly run riot over the senses. The vocals are as abrasive as the dark hooks are irresistible and though they never really change in delivery and expression throughout song and album, they bring a fine caustic wash of malice within the generally compelling and intriguing sounds.

From the outstanding start heavier malevolent shadows crowd in with the following Clouds Above The Desert and its successor The Whisperer In The Dark. The first again carves out an incisive addictive groove to vein the consuming ravenous intensity and malice of the track, its raging and insatiable sonic greed devouring the ear with a near desperate predatory hunger. The second of the two is equally spiteful and rapacious and also gleefully teases with an addiction forming wanton groove which flicks all the right switches for exhilaration. As said there is plenty which is familiar but it is hard to deny the band their persuasion when it sounds as enthralling and delicious as it does very often on the album.

Through the likes of the excellent title track and the intense furnace of sound and energy that is A Doctrine Unreachable, a song with a riff which you could almost accuse of being Metallica spawn, the album continues to please and leave one willing to devour more. The guitar invention and style of Borucki throughout is an emotive conspirator with the passions and equally often a hard task master on the ear with his synapse slicing flair and skill igniting the tracks constantly. The consistent and inventive assault and combative aggression from Schneider too leaves one laying down strong affirmation for his open skills throughout with arguably his finest moment on the album coming in the annihilatory corruption and anthemic call of the outstanding Daily Nightmare Injected, one of the biggest highlights of the album.

Completed by another satisfying fury in Soul Flagellation, Sonic Reign has produced an album which is easy to whole heartedly recommend with just the real absence of something unique to the band the only proviso. It is hard to imagine black and extreme metal fans not finding plenty to relish within Monument in Black though and all should certainly make its acquaintance at some point.