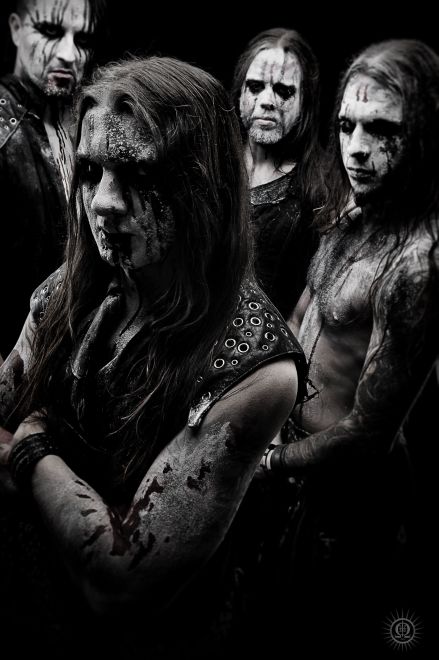 Since forming in 1990, Polish metallers Hate has built and earned a strong name for their unbridled death metal brutality and over the latter years for a more evolved and defined blackened death voice with a diversity of inspirations to their still wholly destructive creativity. They have released acclaimed albums which have brought themselves and Polish death metal to world attention and stood amongst the established powers with impressive ease. Now they stand before the world with their eighth album Solarflesh, a release which sees the quartet at its most powerful and inventive yet.

Hate is a band which has grown into the world through their continually growing towering sound and live shows and tours alongside the likes of Hypocrisy, Scar Symmetry, Carpathian Forest, and Decapitated and through festival appearances at those such as Metalcamp, Neurotic Death Fest, Brutal Assault, and Screamfest. Released via Napalm Records, Solarflesh is another unstoppable force from the band which stretches the evolution in their sound on further from their previous well received album Erebos of 2010. It simultaneously explores, invigorates, and violates the senses with the line-up of vocalist/guitarist ATF Sinner, guitarist Destroyer, bassist Mortifer, and Hexen on drums unleashing possibly their finest moment to date. It is an album which still has moments where it arguably does not go far enough in its original ideas to completely enthral and capture the passions but never offers a moment where Hate have sole control of a willing attention and eager want to hear more.

The album appears through a distant sonic mist in the thrilling emerging shape of Watchful Eye of Doom. Part full length intro

and part haunting atmospheric instrumental with a wonderful female vocal quall of intimidation and seduction, the track is a darkly charismatic invitation and quite compelling. It sets a high dramatic bar for the album to walk which it does successfully for the main across its corrosive length starting with the fiery Eternal Might. The song is a blaze of sonic elegance and carnivorous riffing caged within well-structured barbed rhythms. The vocals of Sinner from within the brewing tempest is a rabid squall upon the ear, his caustic growls a perfect counter to the melodic coaxing ripe within the forceful intensity. Within his brawl though there is clarity which allows the lyrical content to exact its purpose too, something maybe other genre bands should note. For its main the track is a tightly crafted tease without unleashing any addiction evoking elements but solves that with an excellent imaginative sonic trade in the latter breath of the song to make it memorable if not a lingering pleasure after its departure.

The first major highlight of the album steps up next with the ravenous Alchemy of Blood. The track wraps its insidious charms around the ear whilst forcing a delicious venom soaked groove through the tightly seized opening. Flames of razor blade sharp melodic shards erupt from the thick intensity and rampant rhythmic assault yet there is a control and purposeful intent which leaves one hypnotised, especially when further hornet stinging poisonous grooves persist and rupture the senses. Being over critical the song like on other occasions taunts, in that it does not go far enough with its addiction provoking moments of serpentine devilry, but still leaves one glowing with the prospect.

Through the likes of Festival of Slaves with its stunning opening of tribal and epic loud whispers leading into a torrential outpouring of caustic intensity, and the equally compelling title track the album continues to draw one willingly and deeply into its black fuelled heart. The second track is a sizzling encounter which unveils an irresistible Middle Eastern tantalizing to its striking guitar enterprise and sonic furnace of passion. From vocals to rhythms the track gnaws on the senses whilst the technical mastery and melodic invention ignites the passions for a full riveting experience.

Closing on another high with Mesmerized, a song which brands itself on thoughts and flesh with an engrossing malevolence sonically and from haunting enchanting female wails, Solarflesh is a release extreme metal fans should focus in on. It dissatisfies slightly in that it does not push its truly inventive moments to their limits but throughout is an album which brings a freshness and power to the world of Hate and death metal.