The story goes that on October 31st 2005, a band known as Morphina was supposed to play a Halloween party in a dirty pub but disappeared after a mysterious car accident. In their place stepped forward four fresh corpses under the name Superhorrorfuck, and a trail of death and mayhem began from that night forth.

With that dark tale you can feel the essences which inspire the Italian shock rockers and give a rich mayhem to their insatiable and infectious sound. The quintet creates a tomb spawn noise heavily loaded with the loud whispers of Frankenstein Drag Queens from Planet 13 and Wednesday Friday, with further glam and heavy metal spicery to their horror rock eruptions. This rich mixture makes the band and their new EP Gore-Geous Dead, a delicious riotous party with a daring mischief and tongue in cheek irreverence, though it might be your cheek more than theirs which is ventured within.

Consisting of vocalist/guitarist Dr. Freak, bassist Mr. 4, guitarist Paghalloween, and Littlebomb on drums, Superhorrorfuck opened their recorded mayhem account in 2008 with debut album Horrorchy to a notable response within their local graveyard. The following year saw the addition of guitarist/vocalist Sgt. Anubys which allowed Mr Freak to concentrate on vocal duties and in 2010 the quintet unleashed second album Livingdeadstars, a release which showed the band with a stronger more defined sound as they grew into their death soaked craft. Across the years the band has shared their notable live decaying presence with the likes of Wednesday 13, Torpedohead, Vain, Sister, Buggirl, and Hardcore Superstar, the band continually gaining increasing acclaim. The Gore-Geous Dead EP is  without arguably breaking new ground but using already mined flavouring, the thrilling result from a band who has evolved into its most skilled and imaginative stature to date with a fusion of punk, metal, and wantonness which is sheer horror sleaze rioting.

Released via logic(il)logic Records, the release opens with the bruising encounter Death Becomes Us, a track which hits all the 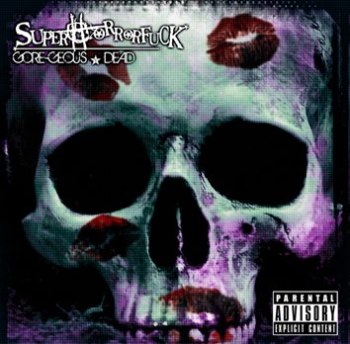 right spots without quite igniting any strong fire for its wares. It does and goes where you expect the song to venture but with a fiery attitude and sound which is wholly contagious and a spark for limbs and head to join its encounter. Maybe not a track to linger in the memory it is still a good bruising start to proceedings.

Things soon fire up from beneath the earth with the following Voodoo Holiday, the first single from the EP. Opening with a roll of heavy roll of beats and a compelling bassline the song is an instant irresistible tease with the coarse inciting vocals of Dr. Freak bringing the perfect growl to the sweltering seduction elsewhere. Into its stride the song wraps familiar yet refreshing melodic and anthemic flames around the ear alongside a sultry brass caress which just adds to the infection which has now a firm hold. It is a glorious brawl of rock n roll with marked invention and devilish imagination which leads one into a definite rapture for its easy to consume and be invigorated by aural virus.

Down At The Graveyard steps from the Alice Cooper crypt of sound with its own sonic interpretation and passion, another impressive track which declares punk and metal as two willing and compatible bedfellows. Like all the songs it uses existing tools to sculpt its own character and presence, its sonic scything and provocative melodic enterprise leaving an agitated and full pleasure within its victims. The same can also be said of the final track Ante Mortem Pictures, a song bulging with sturdy riffs, uncompromising rhythms, and once more an unrestrained revelry which is just addictive.

Gore-Geous Dead is a wonderful slab of aural debauchery, a release you just cannot stop from finding a passion for. Yes it and Superhorrorfuck are not bringing you anything particularly new but they are offering a blatantly thrilling and irresistible confrontation.