Sin’ Sound: From The Underground 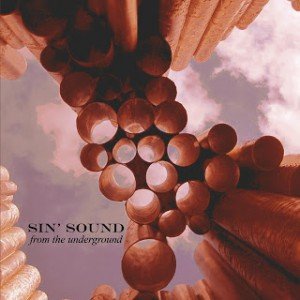 Though taking a little time to make its persuasion, the first encounter with From The Underground held more than a passing hold on the senses, eventually though the debut album from Italian rockers Sin’ Sound emerges as a rather impressive and imaginative piece of rock n roll. Released through Atomic Stuff Records, who the band signed to after winning a competition arranged by the label, the album is a compelling and diverse brew of sound which masterly meshes hard rock, psychedelic 70’s-inspired rock, and funk into something unique and deeply satisfying.

The Brescia based septet formed in 2006 following the break-up of two popular underground bands, Casbah and Synaestethic Sound. A tremendously active band live with a strong reputation for their shows and energetic sounds, Sin’ Sound is set to emulate that reaction with this their first album. Released at the end of last year, From The Underground is record which is never close to being predictable or ever less than enthralling. The musicianship and sounds which flow from within are as accomplished, thrilling, and as mentioned strikingly diverse within the overall distinct presence of the band s you could wish. Arguably the variety of ideas and styles within the songs gives it a stance which ebbs and flows at times, the album having definite peaks which reach noticeably higher than in other moments but throughout the release is nothing but refreshing and openly impressive.

The album does not manage to capture the imagination with its first two tracks for personal tastes but both Celebration Of Apathy and Preparing The Journey are strong and skilled songs thought neither ignites a spark stronger than nodding appreciation for their charms. The first is a heated piece of classic rock with tight fiery riffs and a sonic gift which certainly leaves one impressed with the musicianship and heart of the track. The heavy persistent bassline from Flavio Meleddu is a real plus whilst the guitar invention of rhythm guitarist Enrico Rango and lead Marco Cavalli captivate but overall the song is a companion who is welcome without overly exciting. The second song is the same and like the first a perfectly presented and skilled composition. Fuelled by a jazz funk swagger and sultry brass caresses from Enrico Zoni (trumpet) and Stefano Verzelletti (sax), the song is a more than amicable encounter again without lighting fires.

From here on in the album just explodes onto another level starting with the muscular Introduction: From The Underground. From a slow and heavy prowl with great inciting rhythms from drummer Roberto Micheletti and provocative riffs alongside the expressive vocals of Francesco Zugno, the track erupts into a feisty surge of eager energy and lush intensity. Well into its presence the song intertwines this slower gait with an accelerated passion in its insistency and attack with the guitars sending flames of melodic enterprise across the ear throughout to match the easily evident impassioned lyrical heart of the track. It is an emotive song from words and atmosphere, and beautifully crafted to achieve the greatest effect and reaction.

This excellence is continued with A Bad Day, a song with punk urgency and mischief veining its explosive rock infection. At times the track reminds of Manic Street Preachers and other times thoughts of The Doors and Fatima Mansions are inspired, but constantly the originality of band and song is paramount.

Further highlights come with I Really Like You’re Back, Elisa and closing song Mr. Goodbye, though each track around them leaves one more than merely satisfied. The first of the trio has a slight eighties new wave feel to its vibrant bearing and tight melodic guitar wash which provokes a ‘lick of the lips mentally whilst Elisa is a seductive tease of suggestive brass and a contagious groove which is just irresistible within its brooding passion. This fascinating and bewitching weave coats  the track as it explores its deepest shadows, the restrained yet potent emotive smouldering the soundtrack to the aural scenery and sonic passion.

The final song on the album is again an unhurried walk through the ear, the gradual build of intensity and emotion through brass and guitar quite delicious and invigorating even with its wonderfully dare one say sluggish presentation. It is an outstanding end to an excellent album which initially takes its time to convince but does so with undeniable expertise. If you investigate one band this month you can do a lot worse than taking a listen to Sin’ Sound.