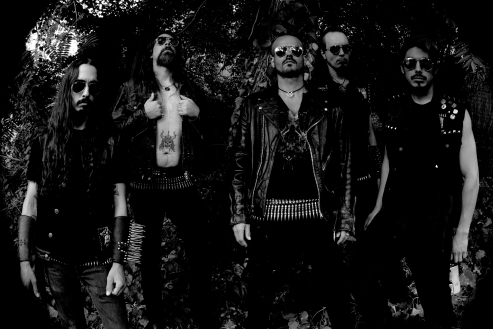 Primal and bleak, Baphometic Chaosium the new album from occult black metal band Lightning Swords Of Death, is an unforgiving and unrelenting torrent of evocative and menacing irreverence. It is uncompromising and challenging to the core, a release which will ignite distrust and fear in some and instinctive rapture in others, but for all it will be a lingering, uncomfortable, and unforgettable experience.

Around six years ago the LA band grabbed attention with their debut album The Golden Plague, the release taking the provocative fusion of occult sciences and the exacting sounds of the bands put in motion two years earlier, into an open intrusive reality. The release alongside the devastating live performances of the band demanded and received impressive acclaim and attention with the band surrounding and following the album with stunning displays of insidious performances alongside the likes of Nachtmystium and High On Fire, and as openers on the Danzig Blackest Of The Black Tour. The band gave 2008 their second release in the shape of a split CD with Valdur which though limited to only availability at their live shows drew further unbridled praise. Signing with Metal Blade Records in 2010, the band with new drummer Mike Vega on board, unleashed their second album The Extra Dimensional Wound to again rich responses. A US tour with Kreator and a place on the Evangelia Amerika Tour headlined by Behemoth followed as did being hand -picked to support Immortal during their only Los Angeles appearance and a performance at the 2010 Scion Music Festival.

Vega, and an album in Baphometic Chaosium which leaves one feeling violated and enriched in equal measure. Described as a ‘devotional work, dedicated to their patron god – A mind altering experience compelled by the embodiment of chaos, death and ecstasy entitled’, the album is a black web of ravenous and spiralling intensity and vicious spiteful hunger.

The title track lays a haunting atmospheric scurry upon the senses before opening up thumping rhythms and grasping guitar caresses. The guttural pit-borne scowls of Autarch express the shadows with malevolence and venom whilst the song expands into a breath sucking weave of raptorial rhythms and oppressive riffs. The bass of Menno is a charnel soaked host of black intensity amongst the merciless riffing and corrosive vocals bringing additional magnetic depth to what is a relatively straight forward gait to the track yet one openly incendiary in inventive intent.

The strong start becomes a furnace of high tempo annihilation as Acid Gate next rampages through the ear to assault and condemn the senses to an exhausting and compelling violation. It holds no inkling of mercy or light, the dense blackened malice of the track an overwhelming seizure of emotions and thoughts. It as do all of the tracks,  erodes and permeates until the listener is infused with and enclosed in the black, light extinguishing intensity.

The swamp of hornet intense vehemence which drives Psychic Waters is a delicious and sensational demonic saturation of the senses whilst R’Lyeh Wuurm is the darkest fury of unforgiving riffs, destructive rhythms, and vocal threatening. It is an outstanding malefaction with a heart blacker than any devouring chasm and the sonic armoury to bring instant submission to its towering primal ravishment but the album reaches its most compelling malignant depths with Epicyclarium. Dispersing a mixed variation to the vocal encroachment let alone the inspired expanse of the music, the track is a sonic incantation for the darkest passions with a snarl and rumble to riffs and energy which awakens essences of early Killing Joke to the black metal satanic distillery. The nasty endeavour is with ease the best track on the album which considering the strength of all shows the height of its sensational confrontation.

Closing with Oaken Chrysalis and another striking and contagious emotional brawl, Lightning Swords of Death has created in Baphometic Chaosium, a release which impacts on all aspects of the body, emotions, and thoughts. Whether the album has enough to make it one which will head thoughts when best of lists are formed come December time will tell but it will certainly be in the considered pile.