Home › Music › Album › Fuckshovel: This Is What We Are

Fuckshovel: This Is What We Are 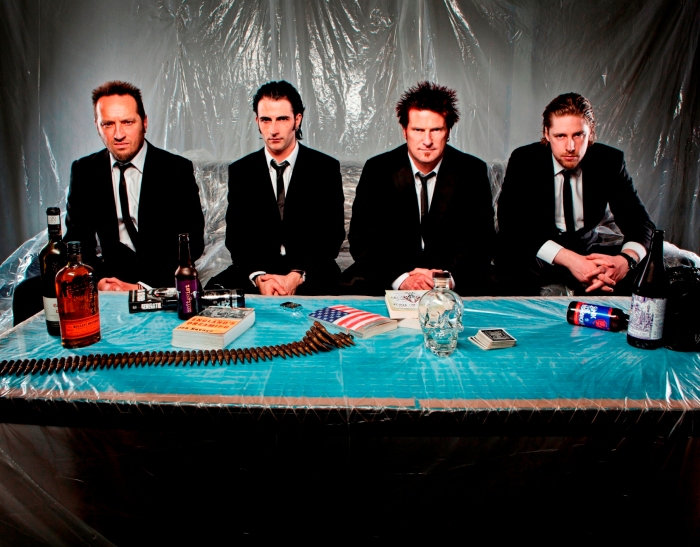 This Is What We Are is an album you cannot fail to become wrapped up in and find yourself recruited to its defiant brawl of irresistible noise and energy. Unleashed by UK rockers Fuckshovel, the release is a riotous storm of rampant rock n roll with no intent to compromise or accept mere appreciation of its forceful sounds, it is all or nothing and for us it is everything such the compelling and inciting muscular pleasure on offer.

Formed in the back street of London in 2005, Fuckshovel has a striking sound which is so easy to joyfully describe. The quartet stare the listener straight in the eyes with a confrontation brewed from the metallic imagination and might of Therapy?, the defiant pose and infectious punk abrasion of The Ruts, and the raw dirty rock n roll of The Wildhearts. To that you can add essences of early Anthrax and The Adicts but primarily throughout the album the first trio come to mind with the punk quartet the major spice to the music which is undeniably from the distinct ownership of Fuckshovel. The pedigree of the band members included experiences gained through playing with the likes of Cradle of Filth, Decimator, Basement Jaxx, Plan B, and remnants of Phil Lynott’s Grand Slam, the foursome infusing those elements into their new venture. The years since has seen the band share stages with bands such as The Germs, Fucked Up, Jaguar Love, Glen Matlock, and Innerpartysystem, receive an invitation to showcase material at SXSW in Texas to great success and response, as well as receiving acclaim and strong radio play upon the release of debut single Long Time Dead, something equalled by the accompanying video too.

Released on February 18th, This Is What We Are is primed to thrust the band to the widest national recognition well if 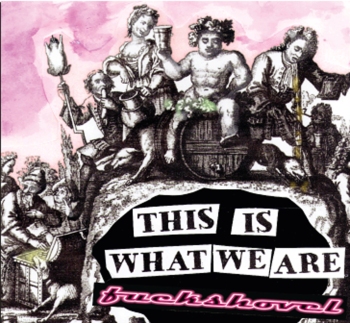 irrepressible and skilfully contagious sounds are any degree of persuasion and the album has those in thrilling abundance. Recorded with producer Rohan Onraet, the album just barges through the ear from its first note to the last middle finger vocal scowl of the release. It is a merciless tempest of antagonistic rhythms, crippling riffs, and caustic emotive vocal. Opener Germs Of Empire bursts free with drums and guitars fighting each other for attention though both receive the fullest from the first bruising touch they deliver. Once settled into its stride the track brings in the Malcom Owen like vocals of Jon Stone to further inspire The Ruts flavouring already washing over the senses whilst the music spreads into a sinewy rock adventure with attitude and melodic teasing to the fore. It is a fiery encounter which starts the album off at a great height and alone makes the release and band one you want to know much more about.

The Antidote scrapes over the ear next, the scarring riffs of Ian Fisher and enslaving drums of Dave Hirschheimer demanding whilst the glorious throaty bass tones of John Faulkner bring instant submission to their predatory mastery. The track is less distinctive than the first but with ease lays a contagion and beckoning which is impossible to refuse. It takes no time in grabbing the enthused enlistment of feet and emotions whilst unveiling compelling enterprise to keep things unpredictable and inciting, the same claim which can be said of Black, another song which arguably does not venture to far into new territories but is just a thrilling assault of ravenous riffs and sonic teasing. It has a towering presence nonetheless to leave one exhausted at its departure and enamoured in its company.

The first Fuckshovel single and their newest stand side by side and both spark the richest of rapture. Long Time Dead chews synapses with its gnarly bass attack and niggling sonic riffing before unleashing a punk rock furnace of imagination and greedy raptorial addiction. Anthemic and as infectious as lustful thoughts, the track is a near demonic addiction brought through insatiable energy, rampaging sounds, and aggression veined by a bass sound you just drool over. New single Schizophonic is the same viral violation in a different guise. Once again the bass of Faulkner ensnares the heart whilst the sonic manipulations of Fisher leaves the senses twisted in ardour within the numbing result of the barbed beats from Hirschheimer. The punk and rock tempest evolves with the vocals into a presence which consumes and riles willing emotions. It is a riot which can only be devoured again and again.

This Is What We Are is an outstanding debut from a band we can only see becoming a real force in UK rock. Tracks such as the melodically snarling Vegas Nerve, the towering All You Got with its Dead Kennedys like hooks and One Minute Silence aggressive gait, and the violently cajoling Skull and Bones all continue to ignite more unbridled fire and euphoria for the release whilst the closing pair of tracks, the insistent juggernaut 2500 Days and the unruly Portia’s Box without arguably reaching the heights of the rest of the album, impressively close off an impressive and exciting debut. The release is rock n roll at its very best and Fuckshovel the worse antagonistic nightmare for all who like a quiet life.