Reapers Riddle – A Touch Of Death

Though the EP A Touch Of Death from Australian rockers Reapers Riddle has been out a while it might be like for us one which has slipped passed the radar upon release and through the subsequent months for many of you. It is though a release which is simply an uncomplicated and thrilling slab of rock n roll which we all should be aware of so time for a belated but required review. Fusing the best accessible elements of hard rock and metal, classic and current, the EP is an eager riot of devilment, energy, and compelling sounds to raise the spirit and stoke up the passions. It does not exactly offer anything ground breaking but does unleash sounds which are honest and irresistibly mischievous, the best kind of rock n roll.

Formed in 2008, Reapers Riddle has spent the following years building a strong reputation and ever increasing loyal fanbase in their home city of Perth and wider afield. Their live performances are renowned for insatiable energy and impressive quality something the EP easily points to, one imagining how thunderous live they should be from the bruising tracks on the release. A debut self-titled demo in 2009 gained good acclaim though it had a quality issue for the band leading to a lack of intense promotion and push country wide. Working on its follow up the band was slowed by a line-up change but eventually A Touch of Death emerged to grab strong attention and responses, something which is no surprise now finally having felt its boisterous might.

From a horror movie sample the release drops a resonating burst of sound, dramatic and intimidating, before opening up into a 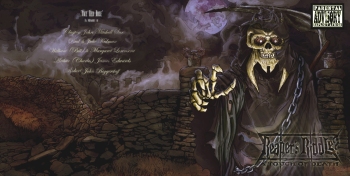 brawl of scavenging growls and scything riffs before thumping rhythms and hard rock melodies join the fine affray that is Zombified.  Soon the vocals of fine Clayton Mitchell paint a visual picture whilst anthemic invitations through the chorus ensure the listener is soon joining the engaging and sinewy assault. The track is a red hot piece of irrepressible rock which makes no demands but rewards fully through easy going inventive metallic abrasions. It is an excellent start which arguably is not matched again, though each of the subsequent five tracks come close and leaves just as much satisfaction with their direct encounters.

The following Cursed continues the horror theme whilst again lining up infectious hard rock hooks alongside a thumping metal driven assault. The rhythms and basslines are as rampant as the guitars are fiery, the combination a rage of aural energy which is controlled yet left to spread its inciting provocation. It has an eighties lilt to its breath which adds to the contagious air of the song and like the opener it is a track you cannot help joining in on.

There is a shift to a less horror rock presence with the excellent Fall Away. It is a song which melds a classic rock and metal flavouring to create another anthemic treat whilst reaping its rewards from the heart for its catchy barbed hooks and melodic teasing. Like many of the songs on the EP, it is a track you feel you already know though it does not sound like any which spring to mind. The feeling is from the band assaulting tried and tested roads though such the compelling and infectious charm of the songs and their obvious quality, it is only a total positive.

No Strings Attached and Lost in Ink both pile on the pleasing and invigorating quality, the first a wanton sleaze coated tease with heavyweight riffs from guitar and bass over improper intent and melodic flames whilst the latter is a hungry grazing of heavy metal riffing and spiteful rhythms. The melodic aside midway in the second song is an inventive unexpected piece of imagination which gives extra pleasure, especially as it is a fluid and seamless addition to the raging surges of the song.

Completed by the emotive One Red Rose, a mesmeric ballad showing a further diversity to the songwriting and vocals of Mitchell, A Touch Of Death is an outstanding brawl of essential rock n roll and Reapers Riddle a band who know how to party right and hard.