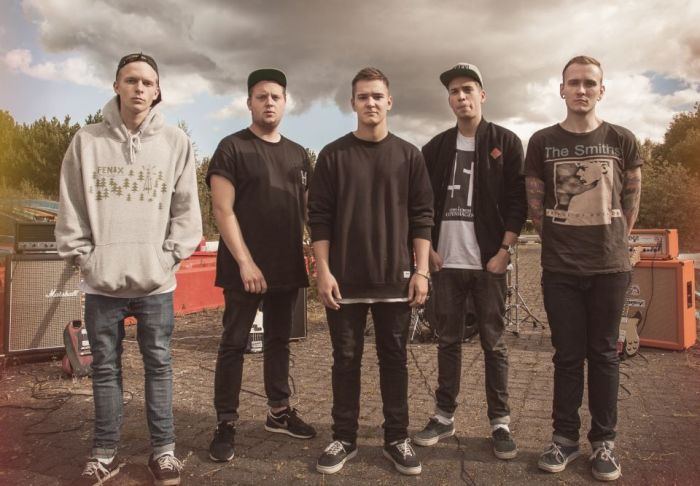 Full of melodic fire and brimstone thrust forth upon a torrent of vicious intensity, Distance the new EP from Danish band Road To Manilla is an impressive release which grabs the attention and inspires great promise for the band ahead. On the surface it seemingly stands alongside many other bands in sound but given time and focus emerges as a beast with distinct flashes of originality and pressing adventure.

Formed in 2007, Road To Manila started out as a deathcore band with a sound which brought them strong recognition but with a venture into and experiment with a diverse melodic breath and more experimental stance, their music has evolved into a melodic hardcore/progressive encounter which given time will draw as much or more acclaim as it moves forward. The quintet from Fredericia is an accomplished unit which has shared stages with bands such as Hatesphere, As We Fight, A Traitor Like Judas, Scarred by Beauty, Inside Process By the Patient, and 100 Knives Inside over the years, but for a wider recognition the release of Distance just might be the successful trigger.

The release opens with Faults, a track which takes mere seconds to unleash its fury and neatly textured sounds. The first notable thing

is the great gnarly bass of Jeppe Frausing, an aspect to the release which continually impresses and adds a delicious menace to proceedings. The vocals of Nicolai Lindegaard blast and graze the senses with expressive might and explosive fire, and though across the six songs making up the EP his delivery lacks enough diversity to match the songwriting it is a formidable and pleasing assault overall. The first wind of the track is good without lighting any flames but as individual presences like the bass and the flourishes of sonic enterprise from guitarists Allan Kristiansen and Jonas Frausing weave amongst the soon sonically singed synapses, the track becomes compulsive and harshly engaging. The midway breakdown with the drums of Niclas Facius stamping further authority over track and ear, the song finds another elevation to make for a great beginning.

A sonic scything opens up Distant next before making way for a tumultuous onslaught of destructive rhythms, snarling basslines, and weaves of melodic heat. Without rising to the heights of the opener the song still sparks an enthused appetite for the sound of the band and its ravenous hunger. The following Lifted takes longer to persuade of its strengths but does step forward eventually as one of the more destructive and adventurous tracks on the release. It is a deeply bruising experience with shifting confrontations in energy and gait driven by a furnace of passion and sonic malevolence. It is one of the less easy listens on the EP but one of the most rewarding…eventually.

The likes of Home and Sleep bring another flush of variety to Distance within what is arguably a formula covering sound for the band. The first is a twisting and lashing rain of fiery melodics and corrosive energy which captivates as powerfully as it bludgeons the ear, the group shouts and ever taunting creativity inspiring and leading the track to become the favourite on the release. The second is an instrumental with a short sample to beckon it in which is just there. Musicianship is as ever skilled and thoughtful but amongst the towering might of the other songs lacks a spark to make it anything more than an interlude or filler. Turned into a brief intro to a release it certainly would find a welcome place one can imagine.

1984 completes the release and leaves one rich in thought of how impressive this band could become. An even more intimidating bass snarl pervades a punk thrusting rage of sound and spite which rampages throughout whilst dipping into well-crafted brief asides and intensity lulls. It is a great end to a fine release and leaves that sense of greater things to come from Road To Manilla to the fore.

Released as a name your own price purchase, Distance is a definite investigation all melodic hardcore and melodic extreme metal fans will find plenty to appreciate in. A masterful record from a band which seems destined to bring great things to the genre in the future.

Tags: 100 Knives Inside, A Traitor Like Judas, As We Fight, Distance EP, HateSphere, Inside Process By the Patient, melodic hardcore, RingMaster Review, Road To Manilla, Scarred by Beauty