Home › Interviews › Mourning Shadows: an interview with Serge Ghoustly and Elena Supi from I Miss My Death

Mourning Shadows: an interview with Serge Ghoustly and Elena Supi from I Miss My Death 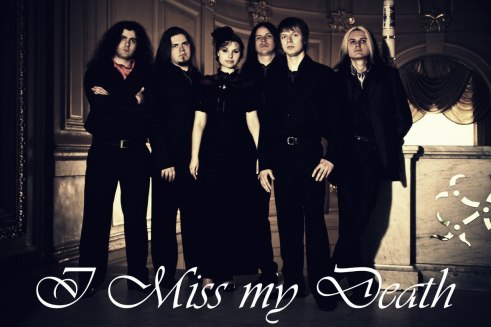 Following the release of their acclaimed first album At Her Funeral, Russian gothic doom band I Miss My Death stepped into a wider recognition. With the news that they are planning to work on its follow-up next year, guest interviewer Kostya Aronberg of Globmetal Promotions, grabbed the opportunity to find out more about the proposed album and the band itself by talking to vocalists Elena and Serge.

Hello Elena and Serge, and welcome to The RingMaster Review. How are you, guys?

Serge: Hello, RingMaster. We are fine, thank you.

I must confess to you it is the first time I have had the chance to interview a married couple that sings together in the same band 🙂 Can you please tell me firstly how you met and what led to you both deciding to form the band?

Serge: We met at the beginning of 2009. I Miss my Death had been already formed and was searching for a keyboarder. Elena first joined us in this post, and after, became also a vocalist. Creative relationship developed into a romance, and soon we became a couple and a managing face of I Miss my Death.

Let us talk about your music style. How would you describe your music and within which music genre in your opinion do you find a home?

Serge: At the beginning of the band existence, our genre matched mostly classic gothic doom metal; however, over time and the advent of new musicians, he has evolved into a gothic death doom. Recently, more and more manifest notes of gothic metal.

Elena: More broadly, our music is a philosophy of the beauty of love and death. “Family voice”, symbiosis of heavy guitar riffs and melodic keyboards – all this only emphasizes the whole dark atmosphere. Music of I Miss my Death is more than just soundset.

I Miss My Death, tell us about the name and why you chose it for the band?

Serge: We chose this name because of its compliance with our music. It symbolizes the ancient vampire who grasped eternity,

survived his death, has known all of his life, eventually tired of it, and as something sublime and unique, misses about his death.

Through the years the band has changed a lot of members. Why have so many musicians left the band and how long does it take you to find new members?

Elena: In our country, playing metal music is unprofitable so many people prefer a good paying job to music. But it’s really easy to find a new musician – there are a lot of talented people in our country. From another side, it’s hard to find optimal person, who plays good, organized, communicated and likes the music he plays.

Serge: We have very good team at this moment, but this is result of hard searching work.

The band has announced that it is going to record a new album next year. What can you tell us about the writing process of it so far?

Serge: Yes, we are going to represent a new album next year. We were expecting for this moment for several years, and hope to surprise our listeners. The writing process has not begun yet, but we have already completed negotiations with the studio recording, produced material and in December will begin recording.

The new album is going to be in the same vein as your first album “At Her Funeral” or is anything going to change?

Elena: The new album differs from our old material. I think, it is better, of course. It will show amazing symbiosis of death doom and gothic metal. As for me, it’s something new for our market. The album is interesting also because of huge participation of other band members, whose influence made songs more fresh and completed.

The band sings in your Russian language but the album title was in English. Why did you decide to go with an English title?

Elena: Well, “…At Her Funeral” consists songs in Russian, in English and in Latin (Ave Maria). The title we album got from the name of one of the English songs from this album, which mostly compliance its atmosphere. The next album will consist of only English songs.

Serge: The title is English because we were looking to the future. The songs in Russian because most our listeners live in post-soviet countries.

Thanks for the interview. Any last words you want to pass to our readers and your fans?

Elena: We hope to visit your country with a concert in near future. Listen to good music that makes your heart beat faster. And, of course, follow us on.