Bombers: Drawing / Buddy’s In A Cult

Crawling all over the senses with sonic clutches of psyche post punk, the new single from UK band Bombers is an unfiltered treat of barbed lures and raw expression. Offering a double track acidic caress, the release has a chilled yet hypnotic beauty which whips one back to the vintage days of the post punk whilst wrapping the ear in a fresh and inciting sharpness.

Released through Dead London Records on January 28th, the single follows their acclaimed debut EP Film Fanatic of just over a year ago. With further tracks in the pipeline, the two songs which make up the single confirm the Birmingham quartet of vocalist/guitarist David Duell, guitarist Matty Warke, bassist Darren Mullen, and drummer David Owen, as a band primed to turn 2013 into something big for them and us through their very satisfying frenzied abrasions of discord beauty and melodic scouring.

Drawing immediately starts on the ear with guitar grazes and a resonating bassline amongst snapping rhythms. As the vocals of 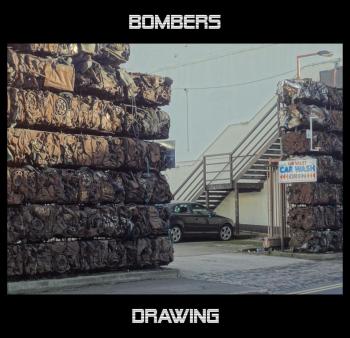 Duell add their nails to the encounter the track is a near toxic rub of sonic teasing and fiery energy. It is a compulsive presence using simple barbed enterprise and small snatches of repetition to great effect and coming over like a slightly unhinged hybrid of The Fall, Joy Division and Artery. A fingertip short of two minutes the track is a thrilling excursion into tart aural shadows and quite simply mesmeric.

Accompanying the song is the equally irresistible Buddy’s In A Cult, its entrance on another delicious bassline and Joy Division inspired guitar coaxing an instant compulsive embrace impossible to ignore. Once Duell adds his cold tones the Exploding Seagulls song Johnny Runs For Paregoric springs to mind. Bombers soon take the senses into different dark corridors though with flames of passion vocally and musically to light the way whilst the drums of Owen rally energies with barracking rhythms to enthuse further the whole enthralling experience. Again barely long enough to warm up the speakers the tasty little sonic tartlet is a real gem and arguably outshines its partner.

Both tracks are outstanding and show that there are still creative melody violating artists out there with imagination and dark inspiring intent. Bombers are on the runway and ready to drop the biggest thrills for 2013 (oh come on there had to be an obvious flight reference from us at some point.)