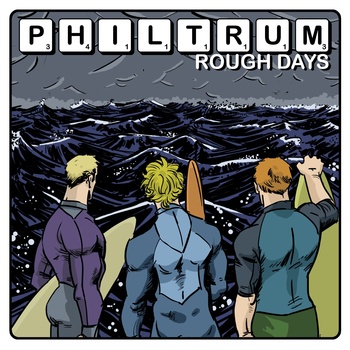 Making good punk rock is not rocket science though to make sounds which stay with the listener and inspire real reactions takes more accomplished imagination, something which UK band Philtrum does with ease. Following on from their well-received Needs Must EP earlier in the year, the Maidstone based trio have upped the game with their new release, the Rough Days EP. Consisting of four raw and bruising confrontations, the release offers punk rock in its barest and most compulsive form. It may not be ground breaking but it is a very effective and pleasing riot.

With the current and stable line-up of vocalist/guitarist Paul P, bassist Gavyn, and drummer James in place from the tail end of 2011, Philtrum has found an impetus and concentrated core sound which has brought them to the fore of attention. The new release also sees a step forward from its predecessor with tighter hooks and stronger crafted structures to the songs without losing their instinctive and barracking energy. It shows a band at its height of enthusiasm for what it does locked in with a blossoming creativity to honest catchy sounds.

Recorded with Greg Webster of Houdini at Sunlight Studios, Gillingham, the EP charges at the ear from the off with The Moment. Fiery guitars and thumping riffs begins the in the face encounter with the bass of Gavyn laying down riffs full of contempt to match the challenging vocals of Paul P. It is a classic approach veined with scorching sonic guitar flames and infectious dual anthemic shouts from guitarist and bassist. Simple and aggressive it is a formidable and deeply satisfying offering of punk rock brought just how it used to be back in the day.

The great beginning is continued with National, a track not too far in structure from the opener but with its own individual contagious insurgence of riffs, inciting vocals, and brawling energy. It is a song you could imagine the likes of The Damned, The Dead Boys, or Suburban Studs letting loose upon their fans, but soaked with a spite and attitude of the now. If you are not joining in by the end of the first round of choruses then punk just does not do it for you, the song an insatiable abrasion which is impossible to resist and best song on the release.

Switchstance and Gets No Better completes the quartet of cracking agitated punk fusions, the two tracks bringing different spices from the genre into their forceful charges. The first is a storm of barbed rhythms and consuming sonic guitar rubs which from its combative initial contact pulls out sing-a-long lures and a pop/ska swagger to leave passions grinning. It is not complicated or going to reinvent the music world but what true punk does, it just lights up the heart which is all one truly asks. The second is an uncompromising and quarrelsome slap around the head which without having the strong appeal of the other three still gets the job done of leaving a satisfying engagement for the listener.

With the Rough Days EP, Philtrum has continued their evolution into a band which is one to keep in firm view and the purveyors of honest original punk rock.