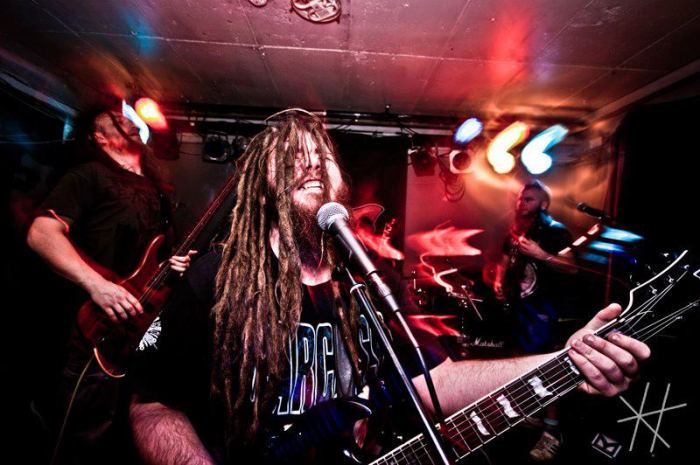 With their debut album in the works a look at the first EP from Irish metallers zhOra is definitely the order of the day especially as it is a rather impressive slab of intense muscle. The Feet Nailed to the Ground EP was released earlier this year and makes a formidable and deeply promising introduction to a band which formed just the previous October. It is an accomplished and skilled confrontation with an intensity and power which has the senses cowering whilst basking in towering riffs and melodic incursions.

After forming the Clonmel quartet of guitarist/vocalist Colin Bolger, guitarist Pancho O Meara, bassist Richie McCormack, and drummer Tom Woodlock, spent two months working on the trio of songs which make up the EP, the evidence of that concentrated time and endeavour in creating the songs easily audible on the release, each sinewy confrontation a defined and eventful engagement bearing the fruits of honed musical thought and passion. January of this year saw the band enter the studio with Ben Wanders at Nebula Studios Limerick and what emerged is a release which fires up the imagination as well as keen and strong expectations and anticipation for the band and its future offerings. 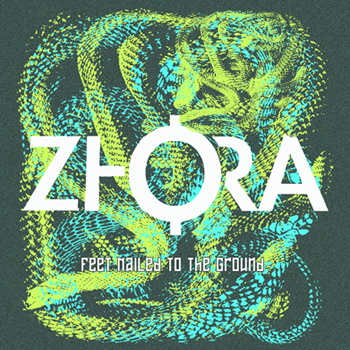 intriguing and refreshing pervades. The song moves into a stalking yet inviting tempest of acid sonic invention and badgering basslines framed by firm rhythms next whilst the vocals bring an additional menacing graze to the intimidating and compulsive storm spreading its inspiring consumption. It is a tremendous start which cements those initial thoughts and lights the first sparks of what becomes a zealous greed to hear more of the band.

Second track The End Of It All begins by unleashing carnivorous riffs and jabbing rhythms to make a contagious canvas for the flames of sonic blistering and spicy grooves which permeate the expressive charged energy. You could arguably say the band is not offering anything openly innovative but as the first two songs show zhOra have a creativity soaked in something different and not easy to define but certainly sets them apart.  Starting as a stomping riot of insatiable riffs and synapse chewing intensity, the song evolves to one with a slight ‘progressive’ breath to its latter presence whilst retaining the hungry and combative heavy growl of the song. Vocally and musically the band hits the spot, the gravelled gruff tones of Bolger a bruising rub which lie perfectly within the sonic mastery at work making a union which agreeably grates whilst dangling a magnetic lure with ever shifting adventure and direction within songs from the guitars and rhythms.

Final song Through The Valley is the perfect example of that tempering between and combination of gaits. The track makes its initial entrance upon an emotive atmospheric shimmering before building to a stomp of chunky riffs and chugging persistence speared by fiery sonic vice from the guitars and raptorial bass lines. The song is an evolving beast vocally and musically which just ignites the imagination further and leaves one drooling with ever brewing adoration. Probably the most inventive of the trio, the song is a wonderfully unpredictable passage of ideas and creativity which offers a little extra with every engagement taken.

The Feet Nailed to the Ground EP is an impressive attention grabbing debut from a band which is surely going to move on to great things. The songs on the release are skilled, thoughtfully crafted, and an intimidating aggressive assault which just thrills and leads one to bear a strongly growing impatience to the wait for the planned album from zhOra.