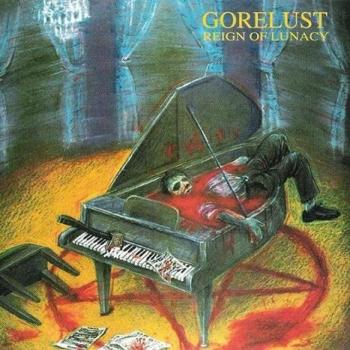 Eighteen years after its release, Reign of Lunacy the one and only album so far from Canadian death metallers Gorelust, gets its reissue through PRC Music whose owner also incidentally gave the album its first appearance. With a proposed new release planned for late 2013, the re-release from one of the most impressive bands of the Quebec death metal scene will be a welcome treat for all fans of the genre, especially those leaning towards the sounds of Suffocation, Mortuary, and Monstrosity.

Regarded as one of the best live bands of their time, the young Quebec band disbanded within the year of the release of Reign Of Lunacy in 1995. The release itself was limited to 1000 units when released by New World Symphony Records and has since changed hands at amounts leading up to $100 a time as well as getting bootlegged by Cryptic Soul Productions in Italy. The true re-release will thrill a legion of death metal fans wanting to own a copy of an album which should be regarded as a classic, and with the recent announcement of the return of the original line-up to finally make a follow-up album next year, you can only expect an eager devouring of Reign Of Lunacy this time around.

The album has been dedicated to Steeve Hurdle of Gorguts who sadly passed away earlier this year and who alongside band mate Luc Lemay at the time, contributed backing vocals to Reign Of Lunacy. The album is a raw and brutal exercise for the senses, a merciless assault of technical and uncompromising death metal brought by the combined might of vocalist Jean Beaulieu, guitarist Martin Fournier, bassist Pascal Chevrier, and Francis Marmen on drums.

From the staggering first track right through to the closing violation Infant Devourment, the album is an insidious capture of the imagination and passions, an extreme metal corruption which you eagerly welcome. The release sounds just as fresh as it did back in the day which is impressive with the spoiling of digital technology since. The track Gorelust opens things up and has the senses drooling with its towering vicious rhythms driving that delicious raptorial bass of Chevrier and the scorching imagination and flesh searing sonics of the guitar from Fournier, their union irresistible as they twist and damage the synapses. The vocals of Beaulieu are unreservedly intimidating and stand as one of the most formidable when placed in the company of other great malicious vocalists which graced the genre then and since.

As tracks like the spiteful Abhorence Beyond Repugnance and rabid Sclerosed Brain Eater infest, the album declares itself as still a measure new bands should become acquainted with when looking for an inventive yet debilitating presence. It is impossible not to feel a little saddened that the band never managed to remain intact, the sounds and might which may have come our way, but with the proposed Gorelust release of next year excitement reigns over the past.

For any genre fan yet to be touched by Gorelust, being churned up and molested by the nasty malevolence provided by the title track and Indigestible Human Remains, let alone the cell invading venom of Anthropophagist, is going to not only be an well overdue surprise but a primal devastating treat which will shape their tastes and preferences. Reign of Lunacy is one of the true death metal classics and a must have for all genre and extreme metal fans. It is the time to become acquainted or reintroduced to one of the greats well in time for what will be their highly anticipated return.