Home › Music › Album › The Cellophane Flowers: Staring At The World

The Cellophane Flowers: Staring At The World

Ringmaster Review – “Staring at The World engages thoughts and imagination like the sun invites the day, with warm mesmeric charm veined with heated enterprise. The Cellophane Flowers is a unique melodic joy to soundtrack steamy days and sultry nights.”

Since the release of their acclaimed If I Was A Girl EP and the following impressive Freeze Me single, UK indie pop band The Cellophane Flowers has been the source of much anticipation for their debut album. Staring At The World gets unveiled upon the world on December 3rd and without any reservations can be said to satisfy all hopes and expectations laid upon the London quartet and more. It is an enterprising and thrilling release of what the band term ‘psychopop’, not that their sounds have that deranged quality really but it does carry a certain disturbed presence which is captivating and quite delicious, a description which can be firmly applied to the album.

The four members of the London based band hail from four different corners of the world joining together to add their own distinct spice to a sound which is unique and imaginative. The first notable thing about The Cellophane Flowers is the distinctive and entrancing voice of Italian songstress Francesca Corradini, her sensual and magnetic distinct tones lighting up the heart of every song. Her vocals have an emotive caress which is as mesmeric as it is charmingly spicy to offer every song on the album a seductive flavour upon the already compelling sounds brought by guitarist Ian Sumner who grew up in Brazil, Australian-Italian-Maltese bassist Luca Napolitano, and drummer Nick Guy who has one side of his heart in Egypt and the other in Suffolk. The album was recorded with producer Dave Allen (The Cure / Depeche Mode / Human League / The Charlatans) and finds the band at their most potent and alluring yet, the ten songs it has within its distinct artwork melodic kisses of warm and tender mischievous pleasure.

Voices is the first song to coax the ear and beyond, its initial simmering whispers a gentle breeze behind the teasing tones of 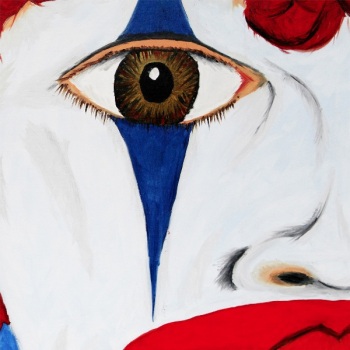 Corradini and a rich sonic guitar enticement. The song has a building presence which incites the pulse and heart into adding their excitement to the rising energies of the track. As it opens its arms to their fullest melodic expanse the feeling of an imminent crescendo is realised with the energetic chorus and fairly rampant stroll the track elevates into. The teasing is repeated as the infectious charm of the song tinged with a shadowed breath overwhelms the senses for a glorious and inventive start to the release.

The following song The Promise continues the impressive engagement, its sinewy basslines and acidic sonics of the guitars combining to create an eighties gait which reminds of China Crisis at times and Au Pairs in other moments. The riffs of Napolitano has a wonderful snarl to their invention offering dark corners to songs which playfully counter the surrounding crystalline and glowing shards of melodies and rainbow like harmonies. The song finds this union at its height, though each and every track in their varied guises are fuelled by their superbly crafted companionship within the framework of sturdy and compelling skilful beats of Guy.

A trio of tracks in the glistening shapes of Pendulum Eyes, Forever Lost, and Tears Of A Clown sway and beckon next, the first two with a definite sixties air to their lush evocative sound. The first is a simple yet sharply defined pop song with an air of five decades ago whilst the second has a fuller soak of the same time within its smouldering elegance. Throughout there is a Donovan feel to the song within the at times scorching almost epic like indie texture of the song. The last of the three is a gentle weave of tender vocals and equally soothing sounds though again there is that miniscule of feistiness which marks all their songs.

The excellent Rock ’n’ Roll with its thumping and hypnotic drums, which the band say were recorded in a massive disused NHS hospital kitchen, sends extra thrills through the body alongside long term favourite song from the band, Belinda. The boisterous first song of the pair is a sizzling blend of raw guitar strokes and those contagious rhythms framing the ever absorbing vocals of Corradini. It is the most infectious ‘riot’ on the album which just sends tingles through the emotions when it opens up its pulse racing climaxes. It is like Throwing Muses and Whale at a teen hangout with Spinnerette and quite irresistible. Belinda is just as addictive with its calypso groove veined fiery caustic grazing of rock guitars and group harmonies. The track is a ‘collision’ of shadows and warmth lyrically and musically and quite brilliant.

Completed by the tangy western simmering Time, the persuasive Lucky Day, and the closing melodic fondle of In A Hole, the album is a release to accompany any emotion and The Cellophane Flowers a band destined to find a place in many welcoming hearts.