Having been left in rapture by their previous EP Ghost Train earlier this year, the anticipation and excitement going into Stay Wild, the debut album from Scottish rock n rollers The Creeping Ivies, was near on immeasurable. Admittedly it would have had to be a car crash of apocalyptic proportions not to have found approval, but the ten track psyche buzzbombs, to steal one of their song titles, took existing expectations and hopes and elevated them into a debauchery of passion. Stay Sick is a stunning irrepressible feast of wickedness which could grace any dance floor, riotous party, or waking graveyard.

The Creeping Ivies consists of the powerful inciting vocals and carnal riffs of Becca Bomb alongside the senses slapping, primal incendiary beats of Duncan Destruction, a duo which ignites primitive urges and raw hunger for their challenging and insatiably thrilling sounds. Together they brew up a storm which plays like the bastard sonic offspring of an illicit engagement between The Cramps, Wanda Jackson, The Orson Family, Patti Smith, and Ray Campi, whilst being violated by Alien Sex Fiend. It is an unforgettable and unique cacophony of instinctive mischief bringing the fullest most invigorating rewards.

Debut EP Rock N Roll Party in November 2011 was their first full statement of intent, though the song Shake It Up had already 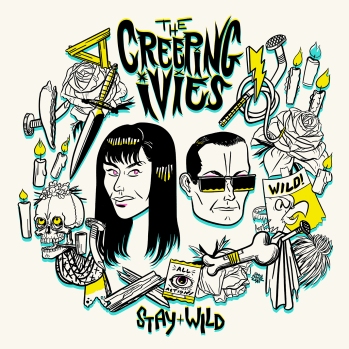 inspired acclaim and strong responses to the band with its appearances on a couple of compilation albums. The band also landed good airplay around the world which accelerated with the Ghost Train EP, including being featured on The Bone Orchard podcast. Shows alongside Viv Albertine of The Slits and Vic Godard & Subway Sect, as well as their own gigs have only gone to place the band as one of the most exciting in the UK, something which Stay Wild will surely turn into worldwide recognition with deserved luck.  Released on December 10th as a vinyl/download through US label Dead Beat Records, the album is a simple yet powerful trip to orgasmic satisfaction.

The album opens with the magnificent Black Cat, a track with a groove which has you scouring rooftops for the Caped Crusader and an honest swagger inviting full participation. The uncomplicated gait of the song is hypnotic enough but with the sonic scrubbing which explodes out and scorches the ear intermittently, adoration is the only outcome. The vocals of Becca demand attention as firmly as her guitar lashes, and standing side by side with the thumping rhythms of Duncan, the pair scar the air and senses with a delicious assault of lustful irreverence.

The feisty stomp of Buzzbomb rampages over the sores caused by the opener with garage punk/rockabilly energy and punchy enterprise. Carrying a spice of The Stooges, Ramones, and The Creepshow to its gait, the song is a storming treat of public disorder combined with sonic revelry and showing the variety of sound and imagination which screams out from within the album.

Madhouse Blues and Mirror Mirror step up next to fire up the passions, the first a flow of caustic strokes from Becca around her wonderfully expressive and synapse scorching vocals. The track has a punk breath to its repetitive and salty touches which steps into numerous realms of genres whilst firmly borne of the first seeds of rock n roll. It is a persistent treat taking no prisoners with its corrosive intent and sets up the second of the two with its throaty tones and ‘banshee’ squalls perfectly. The track transported thoughts to Korean horror film Into the Mirror for some reason, probably due to the The 5,6,7,8’s like spicery of the song and the sharp tingling sonics which enflame the heart throughout.

Every track on the album is a triumph and inspires the same level of wanton devotion; songs like the brilliant punk n roller Spinning, a track which is as spicy and seductive as sex, the sensational echoing tank slapper Bop Like That, the slower but equally compelling song The World, and the steamy House of Ivy, all staggering examples of the uncluttered inventive mastery and brilliance on show. The latter is a raucous maelstrom of feverish energy and body rapping beats, a sadistically teasing psychobilly binge with whispers of L7 and Bone Orchard to its striding exploits.

Completed by Rock N Roll Ghost, a song which devours the heart like a fusion of the Misfits and Horrorpops, and the final exhilarating bruising encounter of the closing title track, the sigh of deep pleasure is audible at its end and the rush to press the play button again to the whole feast of magic beyond eager. Stay Wild is simply astounding and if this was to be the only music to soundtrack the rest of our lives there would only be greedy acceptance and joy.