Home › Music › Calling All Astronauts: What’s So Good About?

Calling All Astronauts: What’s So Good About? 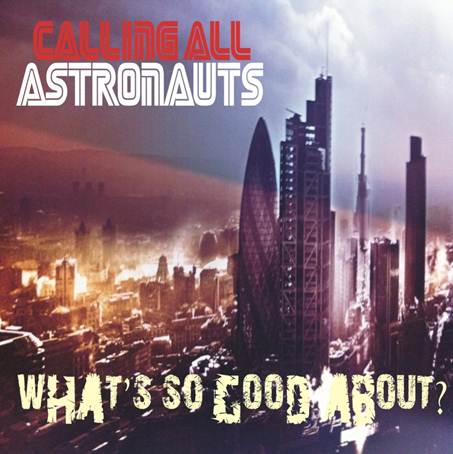 Upon reviewing their previous single Winter Of Discontent, we declared Calling All Astronauts as ‘one of the most exciting alternative rock bands in the UK right now, maybe the best.’ With the release of their third single What’s So Good About? on December 2nd, the impressive track gives no reason to change our declaration. It is a thrilling blend of techno punk and electro gothic shadows which evokes thought and passion with mesmeric enterprise and seductive energy.

The London based trio of vocalist/programmer/producer David B, ex-Caffeine guitarist J Browning, and bassist Kristi B, have ignited plenty of emotion and acclaim their way since emerging with debut single Someone Like You a year ago. The follow up Winter Of Discontent drew even greater recognition towards the inventive imagination of the band whilst performances alongside the likes of A Place To Bury Strangers, Roger Daltrey, Pop Will Eat Itself and Echo And The Bunnymen, not forgetting the band selling out Alan Magee’s “Death2Disco” for their show and constant radio play across the likes of BBC 6Music, RTE, Q Radio, Amazing Radio, and The Reputation Radio Show (Audioburger) established and concreted the band as one of the most inspiring and experimentally adventurous bands around.

What’s So Good About? saunters in with a throaty resonance leading to a flesh sizzling sonic outpouring before hypnotic rhythms and washes of gentler electronic caresses take their place before the expressive and darkened delivery, lyrical and emotively, of David B. Already renowned for their social and political sharpness, the track is an arguably darker and more intense affair than its predecessors, its abrasive and senses searing corrosion and metallic confrontation bringing an impactful urgency and spite to the theme of greed orientated society blinkered through obsession with fame and consumerism to those less fortunate. It is a pulse rate elevating mix of punk rock and electro which burns potently with fiery melodic guitar sonics blistering the already intimidating surface of the song, the encounter agitating and exciting the senses further. The Sisters Of Mercy/Psychedelic Furs lilt alongside the prowling basslines brings another texture and depth to the layered piece of imagination unleashed by the band to engage and enflame heart and senses to even greater volcanic degrees. It is a furnace of intensity and pleasure  showing a continued evolution in the songwriting and strength of the band and their inciting creativity.

The release comes with the less sonically pressuring Echoboy Bounce Remix of the song, the mix taking the track to the dancefloor with added warmth and elegance replacing some of the aggressive intent. It is a vibrant and enjoyable take of the track though lacks the snarl and hunger of the single to match its might, but does add an inventive breath to urge different eager reactions to its ideas.

What’s So Good About? is another irresistible and stunning step in the rise of Calling All Astronauts. To our claim of most exciting rock band in the UK, add imaginative and provocative not to forget impressive. With a show with the legendary Sigue Sigue Sputnik at Mother Live, London on December 7th, Calling All Astronauts go into 2013 with all creative guns blazing.

Tags: A Place to Bury Strangers, Alan Magee, Calling All Astronauts, Death2Disco, Echo and The Bunnymen, electro, Pop Will Eat Itself, Psychedelic Furs, punk rock, RingMaster Review, Rock, Roger Daltrey, Sigue Sigue Sputnik, Someone (Like You), The Sisters Of Mercy, What’s So Good About?, Winter Of Discontent