One of the most visceral bands has again stepped forward with a release which without much debate stands as one of the best extreme metal releases this year. Norwegian devastators Nidingr since forming seeds in 1992 has rarely if ever left senses intact from its full entrance three years later, their complex and enthralling creativity and destructive power a scarring and corruptive conquest providing only the fullest rewards, but new album Greatest Of Deceivers can be marked as possibly their finest hour to date. The release is a triumph of corrosive invention and erosive enterprise, a combination which ignites scorching fires of passion whilst exposing undiluted thoughts all within scourges of caustic energy and aggression to cage and accelerate those reactions. It is a masterful piece of venom marking Nidingr as one of the greatest exponents and deliverers of the darkest rabid shadows.

Consisting of present and past members of bands such as Mayhem, Gorgoroth, DHG (Dødheimsgard), 1349, and God Seed, the quintet from Horten has followed up 2010 release Wolf-Father with a release which continues the theme based on Enochian texts which cored debut album Sorrow Infinite and Darkness of 2005. As with that release Greatest of Deceivers evokes ten Enochian Æthyrs through its expansive and emotive soundscape for a record which searches before opening up dark corners and expressive emotive realms lyrically as potently as it does musically. The album is a release which unveils more texture and depth with each engagement, with the pleasure and coarse rewards only deepening upon every contact too.

Combining a furnace of black, death, and thrash metal, the line-up of band founder Teloch, Blargh and Estrella Grasa who joined the 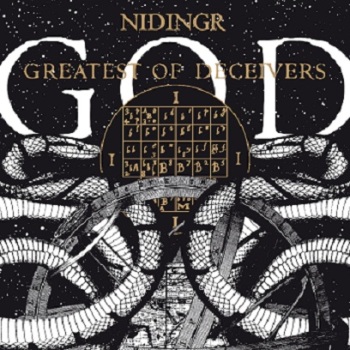 band in 2005, Øyvind Myrvoll who linked up in 2010, and Void, has created a vibrant yet insidious tempest of devastation across the album which lingers far after its departure, the openly contagious yet barbed grooves and riffs, as well as the synapse fusing melodic invention, a storm which triggers a memorable captivation as insistently infectious as it is mercilessly debilitating. Starting with the opening title track, the album seizes control and manipulates the listener with maniacal and insidious ‘charm’. The song from its first second tramples the ear under scything riffs and pummelling rhythms, an instant numbness at play for the caustic vocals and concisely picking melodic cuts from the guitars to unleash their immense creative intent. Across its rampaging and ravaging onslaught the track is unrelenting in accosting and rupturing the mind and emotions whilst adding a craft of imaginative and explosively creative sonic relief which leaves every atom greedy for more.

It is an impressive assault but in hindsight is revealed as a mere teaser to greater annihilatory beauty from tracks like All Crowns Fall, O Thou Empty God, and new single from the album Vim Patior. The first sears flesh and senses with a sonic cloud of abrasive spite with the rasping acid vocals as equally mordant whilst the second is a senses chewing violation of predatory riffs and prowling rhythms which dazzles inventive diversity and towering innovation. It is a track which has one hand on best track honours on the album though all songs offer plenty of arguments for that title, such as Vim Patior, the track an insatiable rub which scalds with pungent sonic rabidity to leave a pulsating soreness by its end on flesh through to thoughts.

Into its stride the album offers up the impressive punkish contagion Rags Upon A Beggar which hands over to the exceptional bruising of The Worm Is Crowned for a mighty aural twining, the latter of the pair a scathing hungry brute of a track with a touch as acidulous as it is a stunning exploration of devastating ideas. Beneath the torrential flames of noise and greedy intensity the vast well of creativity and imagination in song and album as a whole is breath taking and as mentioned something which offers a new taste with each return to the release.

Adding further great heights of excellence before its end with the likes of the swaggering Pure Pale Gold with its wicked intent openly soaking every note and the similarly mischievous closing track Dwellers In The Abyss, both with grooves and hooks which have a glaring malevolence to their seductive swing, Greatest of Deceivers is a staggering slab of extreme glory. Released via Indie Recordings, the album if not the the very best of the year is right in the frontline for many ‘awards’ and acclaim come the end of 2012 and beyond.