With a history almost as intriguing as the tempest of innovative and startling sounds they create, UK indie noise manipulators Velcro Hooks have released one of the best and thrilling albums this year in their debut Gymnophoria. It is a seven track sensation, a release embroiled in sonic teasing yet seductive with its unpredictable and mesmeric ingenuity, and one which offers something distinctly different with each mischievous slice of imaginative enterprise.

The Bristol based band finds its first seeds with the chance meeting between Vancouver musician Jenner Blank and Bristol offspring Thomas Mason in the city of Quetzaltenango, Guatemala. A fortnight of ‘escapades’ ended with each gent returning to their respective countries and a year doing their own thing, which according to the promo sheet for the release consisted of beans and plants. Then Blank turned up in Bristol and the pair began experimenting with aural creativity soon aided by the addition of local talents in Dominic Mitchison and George Garratt. Since then it seems to have been a constant rise for the band, a year of playing free shows where ever they could led them to the attention of Howling Owl Records. That took the band to supporting local bands such as Towns, Weird Dreams, and La Sera, and the release of their first single The Surfing Song and an accompanying video, both finding a strong and eager reception. Now with the release of the magnificent Gymnophoria, it is hard with its outstanding content not to expect the band to wake up the UK as a whole to their immense inventive presence. 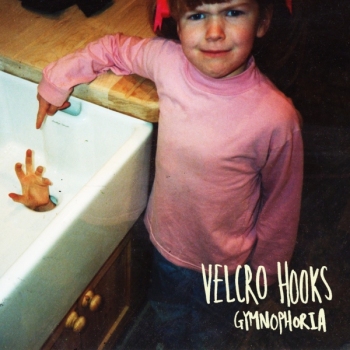 There is admittedly a strong Pixies feel to their sounds but wrapped in flavours which provoke thoughts of many more bands whilst still standing strong as something unique to Velcro Hooks. The release opens with A Love Song For T.S. Eliot and instantly the scythes of guitars has the senses simmering with content. As the vocals enter and the song spreads around the expressive tones that Pixies comparison is rife, especially when discord soaked melodic scarring ensues. There is much more to the song though, the guitars at times bringing a breath which recalls the sharp melodic play of Television and the energetic surges spills essences of Buzzcocks in to the mix.

It is a striking start easily matched and elevated by the following Wasabi Colonel, a song which crawls over the ear with a wicked glint in its eye and the hunger to light up the passions in its heart. From the slight Frank Black like vocals and fiery hooks the song weaves a blend of feisty punk rock and smouldering melodic caressing to bring thoughts of Max Raptor and The Fratellis into the equation though again it must be emphasized the results is something wholly unique to the band.

The album has a variation which can only be admired, a diversity which links every track to another all the same whilst standing clearly and inventively apart. The excellent Wildman with its pulsating bass line and clashing guitars bursts through the ear with the outstanding potent simplicity of The Fall and swagger of the Arctic Monkeys whilst The Prerogative Of Daniel Potter is simply a dark vaudeville delight, both showing the impressive expanse of ideas and sound to the band. The first of the pair is a wonderfully blistering rub of punk with the psyche vocals as unbridled as the maniacally carved sounds, its charge irresistible and imagination a twisted and compulsive contagion, whilst the second collects all the shadows possible to entertain them with unbalanced keys and slight sonic squalls behind the spoken narrative and bedlam dragged screams. Imagine The Shanklin Freak Show meets the Cardiacs and you have a clue to its majesty.

The best track on the album comes in Girlfren, a song which spills its psychotic breath on to relationships for a storm of noise rock which just lights the strongest adoration its way. It is brief, too short to be honest as you feel so disappointed at its conclusion, but in its exhilarating crusade it lays a maelstrom of The Gaa Gaas, Devo, and Innercity Pirates to spark an orgasmic ardour.

Gymnophoria is completed by the just as impressive Yesterday’s Man, a song which is arguably the most straight forward on the release with its postpunk/Joy Divison pop croon, and the mighty Grandpa, No. The closer returns to the more open Pixies soaked sounds which were at large in at the beginning of the album and leaves one wanting so much more as its final sonic wave disappears into the smouldering sunset of the album. It is a staggering release which just leaves thoughts and senses drooling. Velcro Hooks are destined for great things and the album their first great triumph.

Like Loading...
‹ Lynchpyn: Drop The Blade/ Can You Speak Now
Broken Links: Disasters: Ways To Leave A Scene ›