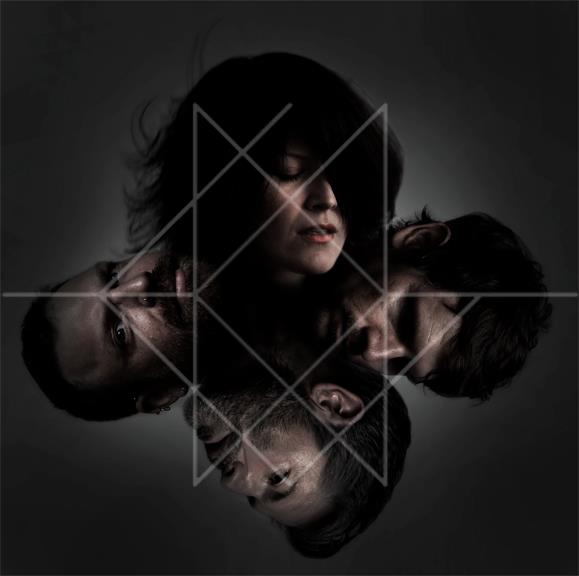 Some bands upon their introduction just make you sigh with pleasure as the flames to a permanent attachment are lit and such is the case with Bad Powers and their self-titled debut album. It is a glorious and deeply stimulating piece of creative invention, its imagination as stirring and impressive as the raging provocative sounds brewed from the distinctly unique musical minds of the band. Arguably the quality of the release is not a surprise given that three quarters of the band were in the acclaimed Made Out Of Babies which called it a day earlier in the year, but guitarist Brendan Tobin, bassist Eric Cooper, and drummer Matthew Egan, have returned with something quite different and greedily enthralling.

The Brooklyn band headed by the stunning vocals of Megan Tweed (also of The Family Curse), has unleashed a hybrid of post punk and noise rock blended into a steaming maelstrom of innovation and ingenious enterprise. It is not the easiest to describe such the unique invention at play, for example at times the album teases the ear like a dysfunctional offspring of The Creatures, with Tweed sounding like a emotionally beleaguered Siouxie Sioux, The Pixies, and Throwing Muses lined by the corrosive breath of Joy Division, and in other moments the senses are swamped with a ravenous erosion brought by a cacophonous smothering from a mix of The Raincoats, The Sugarcubes, Stinking Lizaveta, and Essential Logic veined by the chilled whispers of a Xmal Deutschland. For all those inciting comparisons though the songs are in a realm of their own, a staggering amalgam of ideas and their inventive realisation brought through craft and energy to leave one drooling within a full and eager passion.

Released through The End Records, the album sets to work on the heart with opener New Bruises, the song immediately turning

the key to adoration with dramatic sonic slices across rapping beats and firm riffs whilst Tweed begins her magnetic squalls of immense vocal enchantment. Like the music she offers a warm sizzling caress which alternates with a scorched and tenacious bite, her passionate wind shifts from deliciously scarring thoughts and emotions to coaxing them with a heated elegance. Whichever the source guiding her delivery it is a continual irresistible temptation. The track pulls one into an enveloping sonic wantonness, guitars and bass manipulating the synapses with brewing melodic gasses which consume all resistance whilst the rhythms cage and ensnare with an inescapable captivation.

The following likes of the tempestuous Hit Sniffing Dog and the brilliant Eves And Eyes cast their own distinct spells, the first a mix of intimidating intensity and taunting hypnotic grooves like a blistered union of elements from Dead Kennedys and Belly and the second an expansive crawl of emotive majesty and sinister shadows which delves within the psyche like the darkened fallout from The Birthday Party meeting Breeder overlooked by Morningwood. With its dark strings the track is immense amongst nothing but titanic pieces of dare one say genius?

Throughout its ten stunning tracks the album just offers the richest of rewards from its stylish and brilliantly crafted magnificence. The erosion Black Alf with its rolling plundering rhythms of Egan and abrasive vehemence from Tweedy just sparks higher flames of desire for the staggering creativity, the bass of Cooper snarling with venom within the caustic guitar assault whilst Blueberry transports the ear into an outstanding storm of air pilfering sonic rubs and incessant incendiary grooves. It is not the fiercest of the songs on the album but burns with a melodic heat to leave one breathless and smarting from its precise intensity.

With further heightened pinnacles in Electricity Should Be Free with its Bond like teasing intricacies and evocative swagger, and the quite wonderful and astounding closing track Bread And Butter, the album is without doubt one of the real triumphs of the year. From beginning to end it just wraps the senses and heart in a textured wash of brilliance. From its moments of crunching encounters through to the enchanting yet barbed beauty it seduces with ease through, the release is a sensation and Bad Powers in one stroke has taken sonically gifted music to a new and titanic height.