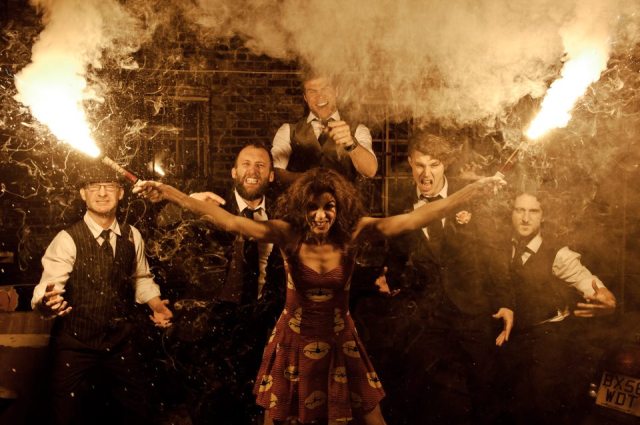 To incite the gypsy in us all and to make each day a summer blaze of enjoyment, the Bang EP from London sextet Molotov Jukebox is a stunning riot of infectious melodies, feisty hooks, and insatiable energy. Combining the heated elements of swing, jazz, ska, punk, Latin fires, and sultry rock n roll, or as they call it gypstep, the band ignites hungry fires within and a lustful urgency to share their irresistible melodic dance. Like a mischievous blend of Gogol Bordello, Sonic Boom 6, Mano Negra, and Bang Data, Molotov Jukebox set new unique adventures for the senses and weave delicious wicked teases to tempt and seduce the heart.

Bang is a revelation, a wholly refreshing and exciting release which continues the impressive creativity given and acclaim received by the band. From their singles Laid To Rest and Get Ready to their previous EP Double Dare, the six piece has lit up the passions with their sensational sounds. It is impossible not to be excited and exuberant when describing the band, and especially so with Bang, the four songs which make up the EP grabbing hold of limbs and emotions from first note to last whisking them in to a breathless and fulfilling contagiously melodic tempest.

First song Tick Tock instantly throws the senses into an enthralled and agitated frenzy, its bubbling tones eager and 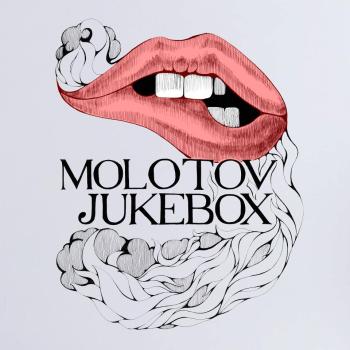 successful in inciting an immediate and energised reaction. The song steps back slightly in its energy as the alluring tones of vocalist Natalia Tena spread their warm and soothing flavour across the expanse of the song to provoke and a deep grin inside and out. Also known from her acting including important roles in the Harry Potter movies and TV show Game Of Thrones, Tena is simply mesmeric, a stunning singer who spices and elevates the songs as impressively as the startling imagination which conjures the sounds. With her accordion skills accompanying her vocals and the keen swagger of the song wonderfully, the track is a tender stomp which has one hypnotised and in mutual union physically and emotionally. At times the flaming trumpet cries of Angus Moncrieff shoot across the skies impressively whilst the sonic whispers which swoon within the song just invite further evocative thoughts and feelings to accompany the partying.

Trumpet flames spark the air again as Tena caresses the ear with sultry vocal fumes to bring Don’t Panic into view, the song simply bewitching from its slow entrancing initial introduction. It soon erupts into a full body of magnetic grandeur to burn the heart, with expectations of an orchestral epic, weight wise, rife. This band though do not deliver the expected and the song is within seconds a ravenous swagger of pulsating prods and wicked melodic taunts, the song winking its eye throughout and chuckling with sonic devilment. The song lifts and enlivens the senses with its swinging elegance and passion, the bass of Tom Wilson and beats of Max Burnett the instigators of mischief whilst the guitar of Adam Burke fire the rockabilly like romp with endeavour and skill. The song is stunning, a melodic furnace to devour and be consumed by brought through inventive imagination and inspired invention.

Give It A Go takes one deep into the Caribbean sunshine with Latin textures to thrill further. Impossibly catchy with the vocal additives of violinist Sam Apley running perfectly by the side of the ever captivating voice of Tena, the song has bits on board its listeners swaying which have no rights to be and the heart smouldering with adoration. There is a slight mariachi feel to the song to add to the diverse flavouring which leaves the soul breathlessly submerged in its contagious presence. By now subservience to the immense ideas, musicianship, and most of all glorious sounds is a sealed deal but the band still ensures the pleasure is a full event with the closing song.

Trying weaves in with a subtle gypsy punk coaxing which fires up into a fully vibrant festival of thoughtful melodics and enticing grooves. Yet another fiesta to swing hips and voice to, the song is a charismatic sunset with full glowing skies and emotive peaceful rays of light from its rosy setting sun. It is the perfect finish to a perfect release, the band and EP defying criticism or anything less than ardour.

Molotov Jukebox is a band all should have and need in their lives, the purveyors of warmth and instinctive pleasures to bring the deep rooted fun in all to the surface, and the Bang EP the vehicle leading to bliss.