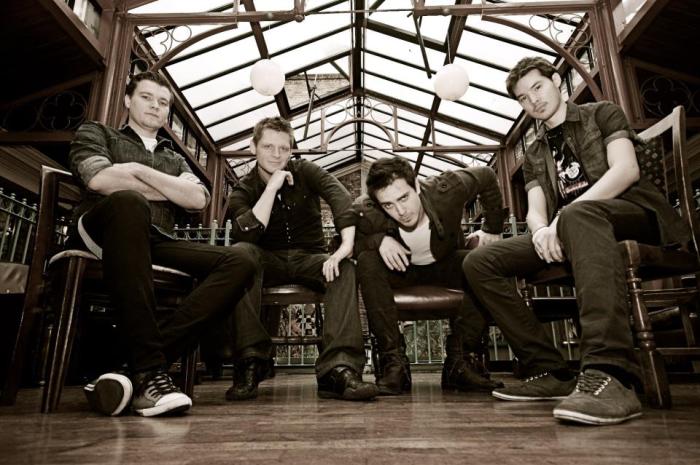 After the first listen to the debut album from UK alternative rock band Canvas Wall came to a close the first reaction was WOW! Subsequent plays and attention to Thinking Out Loud only enforced that reaction to louder and greater heights as the album showed itself to be one of the more inspiring releases this year. Every song no matter its delivery, whether reserved and expressive or charging and dramatic, is a big hearted anthemic infection which is irresistible to resist. The album has a familiar gait brought through unfamiliar sounds and songs to make for a strong and frequent companion long into the future.

The band formed in 2008 from the seeds of the combined of talents of Simon Dounis (vocals, guitar)and Craig Rogerson (drums),who were already playing together in Malta. Relocating to the UK, the pair was joined by Alvin Ho (guitar) and Nathan Bryans (bass) as the band found a full and powerful line-up. The next couple of years saw the quartet working on new material as well as touring, with their live debut coming at the 100 Club in London. Their debut single Sooner or Later and the quickly following by Close to the Edge, both found strong responses and good acclaim in 2010 from media and fans alike. With a video for the second song the following year made by the world famous visual effects company, The Mill, building and increasing the momentum of the band, new album Thinking Out Loud has all the armoury and stunning sounds to throw Canvas Wall right into the deserved headlights of mass exposure.

Financed through Pledgemusic, the album is an instant glamour for the senses with opener City Lights, its charms and 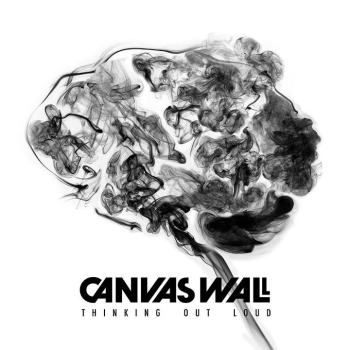 melodic infection as dazzling as the subjects in its title. With stomping beats and charged riffs the song paces the senses with eager intent, and once joined by the impressive vocals of Dounis who instantly marks himself as a fine and impressive voice, it draws an even deeper connection from its guest. With big melodies to accompany the bulging anthemic feel it offers, the track is a magnetic lure from which there is no willing return, a stirring and impactful beginning from which any album could learn a thing or two.

The following Make it Count takes a step back on the energy though is no less dramatic in its presence. Already by this he second song that earlier mentioned familiarity is a strong caress upon the ear though no one comes to mind as an obvious comparison. With the big boned rhythms and burning melodic power there are pop essences of a Lloyd Cole and The Commotions and the rock textures of a Soundgarden or Pearl Jam but it is all uniquely and thrillingly Canvas Wall.

The excellent Stand On A Mountain and new single The Road To Bliss continue the stunning quality, the first another part stadium rock like powder keg of infection and the second, an eighties whispering electro touching slice of imaginative and towering triumph which ignites tingles where tingle fear to tread.

As the likes of the swaggering I Wish You Well, the riveting Take It All with its twisting dynamics and a title which epitomises the whole attitude of the album, and the brilliant Close To The Edge ignite the heart, the release is verging on places only loved ones can access. The latter of the three is an orgasmic aural slice of magnificence which will forever play in the head every time the band name is mentioned. With power chords as incendiary as any storm and a passion which is impossible to resist the song is a colossus of rock pop majesty.

From beginning to end Thinking Out Loud is a stunning romp from which the deepest satisfaction is spawn, the further likes of Don’t Look Down, What Have I Done, and Not In My Hands to name just three more, continuing the constant rapture. Canvas Wall are a big band with even larger sounds and the time ahead just the gateway for them to explode to the greatest heights.