Dark Stares is one of those great bands which draw multiple comparisons to a wide array of bands but really do not sound like any of them. They may at times come up with a sound or riff which echoes another band but they are mere colourful strokes within a storm of individual creativity. The quartet from St Albans in the UK, has had the likes of The Killers, Muse, Manic Street Preachers and even The Mars Volta to name a few, offered as references in varying degrees to their music. To that you could just as easily add others like Faith No More and Green Day at certain moments of individual songs, but though still a band evolving their sound and distinctiveness, Dark Stares have a sound which has its own flavour. 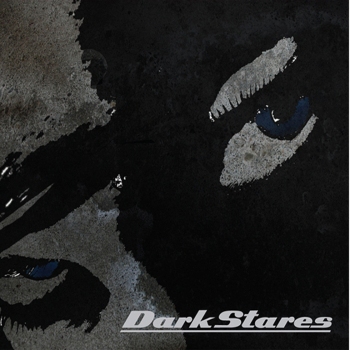 best, energetic, towering, and with a spine of powerful riffs alongside veins of irresistible grooves. Formed in 2011, the band consists of three brothers, Miles Kristian, Brett Harland and Taylor Howell (vocals and guitar, bass, and drums respectively) alongside guitarist Harry Collins. As their first year neared its end the band found themselves with high profiles gigs under their belt including supports slots for Enter Shikari and The Darkness. 2012 has seen the band go from strength to strength and with the release of Tell Your Friends on September 10th announce their full arrival in fine style.

Dark Stares open up with the stirring Whisky which immediately has feet and senses in league with its stomping rhythms and melodically guided riffs. Its energy is raw and slightly abrasive to ignite the fullest attention which the addictive grooves and heated hooks feed with relish. Not quite a storm, the track is a powerful stomp through the ear which with its multi faceted flavouring, lights multiple fires with. The guitar play is striking and fills the skies with delicious sonic sinders whilst the melodic craft around it comes from hard rock at its best.

It is an impressive start soon surpassed by the mighty Long Live The King. The song takes no time in giving suggestions as to why bands like Muse, Manics and Queens Of The Stone Age have been mentioned in the same breath as their sounds, its presence again a flurry of elements combined for an inferno of excellence. As all the songs show, Dark Stares gets the job done without over blown theatrics, the drums and bass unleashing instinctive hard and dangerous edges whilst the guitars and fine vocals explore and light up all their shadows. It is the perfect union for an outstanding and deeply satisfying result. On this song they simply leave other rock bands in their dust, the infectiousness and addition it offers taken to illegal levels.

Third track We Are The Kings Tonight wraps around the ear with a less intense eagerness though with equal strength and skill. It offers a mid pace drive which paves the way for sharp and inciteful play amidst melodic caresses which draw sighs, manly ones of course. The vocals of MK Howell are exceptional and across the whole release he shows he is a versatile and controlled power to match and ignite the music and songs, as they do his emotive delivery.

Invaders ends the EP on another rampage of contagion, its grooves and riffs instantly your best friend and its heart a boisterous yet passionate embrace. Anthemic and with a mischievous swagger at times the song is an immense end to the release and completes one of those rare times where every song ends up as the favourite.

Dark Stares will be like their EP, immense. They still have much to discover within their creativity and music which with the strength of Tell Your Friends makes for one exciting thought.