Triggerman: Hail To The River Gods 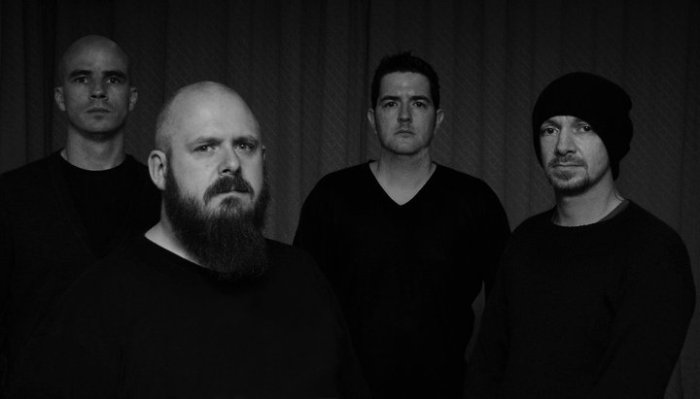 With the rhythmic bombardment of a Black Tusk, the monster riffs of a Mastodon, and the mischievous grooves of a Red Fang, we bring you arguably the most exciting release of the year in Hail To The River Gods from Northern Ireland stomp rioters Triggerman. The seven track release is a monster of an album which simply lights up all the senses, accelerates the heart, and has limbs doing movements only the devil could have designed. If the likes of the bands previously mentioned and those of Orange Goblin, Clutch, and EyeHateGod ring your bell, Triggerman will be your next orgasmic pleasure.

Hail To The River Gods is the third album from a band formed in 2002, with the current line-up of vocalist and guitarist Bap, guitarist Niall, bassist Dixie, and Rory on drums, in place since 2009, give or take a month or two. It follows the critically acclaimed Brand New Day of 2010, a release which had the likes of Metal Hammer and Classic Rock Magazine drooling. Heavier than a mud slide and more rampant than a dog in heat with the moves to match, the album is a senses tenderising thrill of metal, stoner, and classic rock with plenty of other additives to spice the unbridled enjoyment. It is a release which is not trying to invent or re-design anything, just one wanting to unleash the biggest towering grooves and riffs known to mankind, which it does with accomplished skill and energy.

rhythms and fiery guitar chords. The vocals of Bap soon enter to begin the tale of the title, a mythological air soaking every word though at times any woman scorned can fit the story; yeah we have all been there guys. His delivery throughout the release is a spoken growl in a similar style to Jello Biafra which adds to the muscular and raw energy of each and every song, verbal and musical biceps flexing with every word and note. The constantly agitated fury of the drums is a hypnotic pull whilst the guitars and bass unleash crushing hungry riffs with ease. The glorious solo which scorches the air as the song reaches its climax leaves the scent of burnt flesh in its wake which lingers whilst the track evolves into its successor.

Rise Of The Woodsmen is a storming assault, a raging onslaught dripping sweat, power, and menace like its subjects. For two and a half minutes the track works every sinew within its colossal body, riffs bulldozing everything in sight and grooves sparking fires, their melodic embers showering the skies. The song is a worker, a track which gets things done without distraction or obstruction and loving every damn minute of it, which ensures we do too.

Every song on the album is immense and the provider of infectious glory but some do stand on the top step above others, such is the case with the title track. Hail To The River Gods is a song which with its story of men going off to sea and paying homage and prayers to the River Gods for protection, is rife with absorbing folk metal spicery. At times it teeters on the edge of pirate metal with essences of Alestorm raising their bones. The song is a prowling stomp, again a hard working beast of a track which reflects the energy and muscle of its content.

Th’on Strange Brew is a magnetic treat, its stoner grooves sirenesque and thicker than tar. The fumes the guitars conjure with their riled riffs overwhelm and intoxicate the senses and with the rhythms inciting the devil inside and a groove which unleashes a wanton wickedness, the track is a wonderful danger to man and beast.

The sixties blues tinged pagan breath of Flower Of Life takes another contagious diversion as the album again shows diversity whilst the closing pair of the brilliant Wake The Dead and Blind Side Of The Moon twist and bewitch the ear with insidious intent. The first of the pair is a fury of anthemic rhythms and aggressively driven riffs, a charging call to arms which is irresistible and the second a sludge flavoured prowl which drags its listener through every treacle thick shadow and oppressive dark corner within its oppressive heart. Wake The Dead emerges as favourite song on the album but all leave nothing but deep pleasure.

Quite simply Hail To The River Gods is one of the best releases this year and Triggerman our new best friends. Go discover them for yourselves and join their addicted ranks too.