Kill The Conversation: Farewell For The Last Time 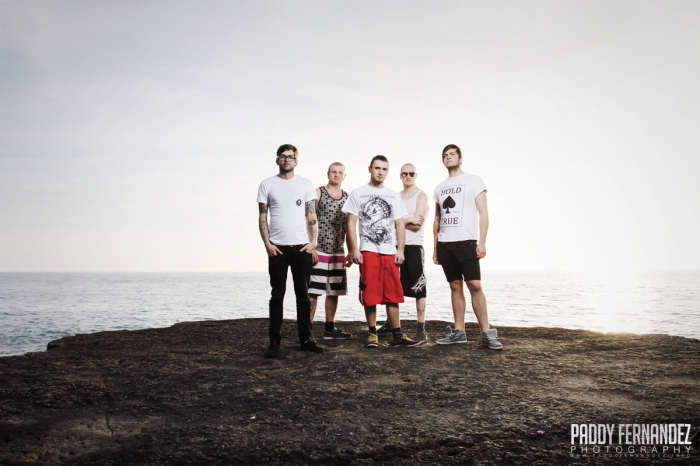 Already before its release the new EP from UK metalers Kill The Conversation seems to be splitting opinions remarkably, some loving it and others finding a loathing usually reserved for young Bieber. Farewell For The Last Time is a release which will either work for you or not. It admittedly has its limitations and unfulfilled potential but still is an impressively enjoyable slab of sonic brutality.

Kill The Conversation is obviously a band unafraid to try things and though it does not always come off it is refreshing. Though crossing a few genres, their sound is metalcore based and in a category which has become quite static in its invention, a band at least trying to be unique is better than one just offering another carbon copy assault. The five tracks on the EP are a concussive confrontation which leave a deep scarring behind them, at times painful and in others abusive but always intriguing and unpredictable.

Formed in 2009, the Dorchester quintet has already grabbed opportunities to make an impact through the sharing of stages with bands such as Sepultura, Rise To Remain, Malefice, and Revoker. Their debut EP Figure Of Speech also drew the attention of people but with Farewell For The Last Time it is accurate to say the band will not go unnoticed. Comparisons to the likes of August Burns Red, Bring Me The Horizon, The Devil Wears Prada, and Parkway Drive have been ringing in their ears as people try to find a tag but though the band echo of a few they create ideas like no one.

war, though Fold soon erupts into a blistering surge of coarse riffs and an explosion of abrasive guttural vocals. Once into its stride, the guitars of Liam Garry and Luke Toomer offer up an acidic clinging groove and flesh wilting strikes before the heavy artillery of the band takes over with heavier impactful riffs, crippling rhythms and vicious vocals from Jack. The song is arguably quite straightforward and possibly not the most adventurous but still a powerful blood pumping exercise in towering metal.

The following Shattered Shell immediately comes at the ear at full throttle, its badgering riffs and malicious vocals a scurrying and predatory playmate for the senses. The track soon mixes things up with pace twists and rhythmic contortions from drummer Brad Birchall. As the song evolves it takes a break, putting the intensity on a leash for a breather whilst stabbing riffs and beats break the air. The sound at this point is clean but festering an anger which is soon expelled as the track returns to its malevolent ways. The climax feels like the song is standing over and chewing ones carcass amidst triumphant and gloating pig squeals from England. The track is a stirring and provocative brute which labours a little against the opener but opens an appealing well of invention from within the band, something the following song continues.

No More Fish In The Sea is simply chaotic magnificence, a sprawling wave of imagination. It opens with riffs rifling the ear and rhythms holding guard over the intrusion. Sonic manipulations litter the air to ignite deeper interest whilst again England spews his own style of vehemence. His delivery though not especially diverse, is soaked in passion and mischief adding fluctuating character to proceedings. The band throws chugging riffs and a melodic scorching across the senses as it works into the song and though again it is maybe not high on originality one eagerly basks in the towering combat being waged upon the ear. A break into a raw and hollow peace which leads into a post hardcore attack vocally and musically, allows the excellent bass work of Laurie Thomas the clarity it deserves but is often missing elsewhere. Returning to a metalcore climax the track is a gem with only the switch into the unexpected aside lacking not as successful as it could have been. The returning banshee shrills are good too though hopefully England will not overplay them in the future to diminish their strength.

The remaining two songs keep things running on a high. Blakes Demise is a bruising encounter which tests the resolve but counters its vindictive nastiness with cutting addictive riffs, an insatiable groove, and infectious ear candy melodics It is a good song surpassed by City In Ruin. Starting with another speech sample the track spears its air with fiery sonic bursts from the guitars before exploding into a riotous feast of energy and melodic enterprise which seemingly teeters on folk metal. The track is excellent with more twists and turns than a slinky on the stairs though again it is unable to bring fluidity to the transition between the contrasting sounds talked of and the charged metal onslaught which closes the song.

Farewell For The Last Time is an impressive release which holds great promise for Kill The Conversation. For sure the band is not the finished article yet and probably are destined to always rub some up the wrong way but if they carry on like this they will find and give formidable riches.