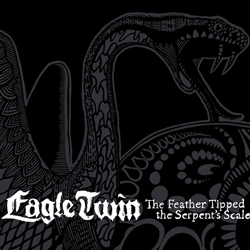 Like melodic tar the heart and breath of The Feather Tipped The Serpent’s Scale, the new album from US sludge metalers Eagle Twin, sticks to and smothers the senses with startling intensity and refined craft. It is a coarse and scorching experience which ignites creative fires and expressive thought whilst treating the ear to adventurous and provocative imagination.

From Salt Lake City, Eagle Twin consists of guitarist/vocalist Gentry Densley of legendary post-hardcore/jazz band Iceburn and ex-Form of Rocket drummer Tyler Smith. Together they create a sound which at times is concussive but is perpetually swarming all over the senses to evoke and provoke. Their sludge metal core pulsates with heavy metal and progressive essences to easily set them apart from fellow genre bands and make time spent in their consumptive presence memorable and rewarding.

The Feather Tipped The Serpent’s Scale follows directly on from their acclaimed debut album The Unkindness of Crows. Though there was a split 7″ with Night Terror in 2009 before the first album and another split, this time an album alongside UK band Pombagira in late 2010, the new release continues directly the concept started with The Unkindness of Crows, picking right up where it left off. The first album investigated and brought themes regarding the crow, their portent and associations in biblical and mythical worlds. The Feather Tipped the Serpent’s Scale continues from the crows having battled the sun to be burned and sent back down to earth as black snakes, the album theme this time looking at the serpentine presence within mythic and symbolic arenas.

The album ignites and swarms over the senses with the opening Ballad Of Job Cain, a two part eighteen minute epic which sizzles with sonic derision and blood boiling grooves brought through a malevolent intensity. The guitar of Densley embroils the atmosphere in showers of consumptive blistering sounds and energy whilst the rhythms of Smith masterfully frame and direct it all through the ear with gladiatorial skill. The vocals of Densley growl with a gravel infused tone to his chanting and singing, his Tom Waits like delivery so abrasive at times you feel the flesh in his throat withering.

As with the following Adan (Lorca), the pieces do stretch the staying power though the quality and evolving invention ensures there is never a moment one is looking forward or for an exit. The third song has moments where it is a maelstrom of energies and festering sonics to make general discord feel like a quiet afternoon, its corruptive heart disorientating and vehement. The song does temper it with some melodic stretches which helps what is a testing yet rewarding track find a ready welcome.

The following Snake Hymn and Horn Snake Horn assault with equal expertise and deviousness, the first a slurry of guttural borne riffs and malicious rhythms which leave the body restless yet mesmerised and the second is a track which with a relatively brief stay is a slowly searing melodic heavy weave which envelops like acidic fog. Both evoke shadowed emotion and thought and though the lyrics get smothered by the intensity at times the song still evokes ideas. The second of the pair leads straight into its companion It Came To Pass the Snakes Became Mighty Antlers, an excellent though fleeting instrumental which is as delicious as it is caustic sonically.

The closing Epilogue, Crow’s Theology brings things to an oppressive end, its doom assault a raw and devouring weight which sucks the air from within its recipients. It finishes off with a towering presence what is an immense album. It is not a release which maybe is going to top favourites lists outside of the genre but easily stands equal with any album in regards to craft, invention, and imagination, and well worth almost an hour of any life.