Like a soundtrack to a disturbed world drawn from the imagination of Sergio Leone, David Lynch, and Robert Rodriguez, 2 the glorious new album from Italian band Guano Padano, lights up every aspect of the body. The release awakens the senses, incites thoughts and imagination whilst using feet like a puppeteer with their contagious heated sounds and rhythms. The album is outstanding, a release which fits nowhere but has a feast of delights for all.

The new album follows the 2009 self titled debut album from Guano Padano which had a limited release in Italy. Released through Ipecac Recordings, 2 gives the band a needed and deserved wider canvas to recruit from and it is hard to imagine their following not increasing dramatically as the album reaches many more ears. The trio of guitarist/multi-string instrumentalist Alessandro Stefana, Danilo Gallo bass/piano/organ and Zeno De Rossi on drums, unleash a series of cinematic instrumentals which evoke individual moments and lives within this golden world which dazzle and transport thoughts to new yet familiar soundscapes. Musically the band combines the fine flavours distilled from jazz, bluegrass, surf rock, country, folk, rock and more, to conjure a smouldering journey with a spaghetti western film noir breath. To be honest it is wonderfully hard to explain but very easy to immerse within and enjoy to the full.

The album opens with the short Last Night, a piece of music which is emotively elegant but comes with a blistered 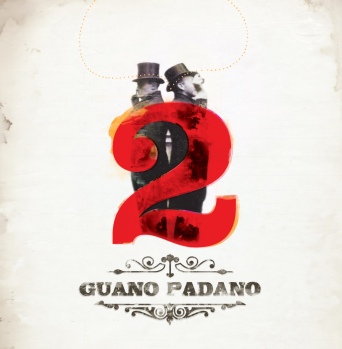 background and increasing intensity as it moves into the waiting heat of Zebulon. The second track gallops into view with an eager swagger and shimmering spaghetti western melodics. You can feel the heat sliding off the atmosphere which wraps the music and visualise sceneries of sand and bristling activity. There is also a slight surf spice to the composition which wakens the taste buds for the full flavour a little further on within Gran Bazaar.

The track is stunning, a sultry presence within the ear and a seductive temptation for the senses. With guitars either picking at notes to find their limits before snapping  or sending flames of sharp melodic  passion through the air, the track is an insatiable infection offering a fluid feast of Middle Eastern promise and surf romance within its mesmeric world. It is a near wanton tease which no one can or would refuse.

The album as each track passes into the imagination, shows fully eclectic sounds and ideas, the likes of the slow pacing Gumbo with its pulsating jazz whispers and evocative melodic showers, the excitable hoe down Bellavista, and Miss Chan with its hypnotic oriental kiss, all offering  new detours and experiences within the expansive journey. The last of the three starts off with a scratchy mesh of oriental radio voices and the plunking of traditional eastern strings before erupting into another sizzling fire of surf and Japanese sounds veined with acidic sonic guitar manipulations. As seemingly everywhere one is transported into an enveloping weave of picture telling emotion and sonic sights soundtracked by great provocative sounds.

2 is an album with every track leaving nothing but deep pleasure in their wake but as always personal tastes finds ones which stand out from the crowd and alongside Gran Bazaar there are two which ignite the fullest fires. Firstly there is Lynch, a track borne from the dark shadows and empty solitary street corners with just a lone jazz musician for a friend.  The track has a film noir breath but behind it there is a sinister and almost unworldly pulse, a hungry discord waiting to misdirect the melodic enterprise. It is glorious, arguably the most powerful of all the tracks and one which lingers in the mind well past its expiring notes.

As with their first album, the band brought in the talents of others on 2 letting the craft of the likes of Marc Ribot (John Zorn, Tom Waits), Chris Speed, and Paul Niehaus (Lambchop) grace the release. The other great highlight of the album Prairie Fire, the only track with vocals. It also features a guest, the inimitable Mike Patton. The track is brilliant, a song with the wicked grin of the devil and the mischief of, well Mike Patton. It is slightly schizophrenic with more than an air of a Gotham City villain to the vocal character. It is a rock n roll contagion of the purest sin brought with a wholly unique and inventive majesty to have one dribbling lust. If this song does not take Guano Padano in the ears and minds of the world nothing will.

The album ends with a cover of the Santo & Johnny track Sleep Walk, a song which has had numerous versions made of it and it has to be said Guano Padano do not do anything to make it their own. Against the excellence before it is just a pleasant kiss goodnight from the album to be honest and the only time the album drops its levels.

2 is a vibrant dream and escape rolled into one stirring and immersive journey. It gives only pleasure whilst inspiring thoughts to create their own landscape and companions for the trip alongside your aural tour guide Guano Padano.