The first thought listening to Autotheism, the new and third album from tech death metalers The Faceless, is that the band must have great memories to play the ever shifting rapid fire torrent and maelstrom of sounds and ideas which comprise the songs on the album. It is a perpetually evolving seemingly restless storm of intensity, energy, and imagination. The Faceless has always been unprepared to stick to expectations and push their boundaries but now they have unleashed a whole horde of inventive demons.  The album is schizophrenic that is fair to say but with all aspects and identities in full control of their ingenuity and direction. The Faceless has returned to shock, surprise, intrigue and most of all impress.

With their 2006 debut Akeldama, the band stood apart from other technical death metal bands whilst its successor Planetary Duality two years later, took the band to higher plateaus and respect as they pushed their boundaries far beyond their introduction. Autotheism takes an even bigger leap forward as The Faceless emerges after four years with new rampant progressive and melodic endeavour to their sound. It is still as brutal and corruptive as ever but now is locked in a maniacal storm of progressive enterprise or insanity. Since the last album the band has under gone changes with departures and subsequent new members in the form of vocalist Geoffrey Ficco, guitarist Wes Hauch, and bassist Evan Brewer joining drummer Lyle Cooper and guitarist/vocalist Michael Keene.

Released through Sumerian Records the album immediately grabs attention with the introduction to first track Create, 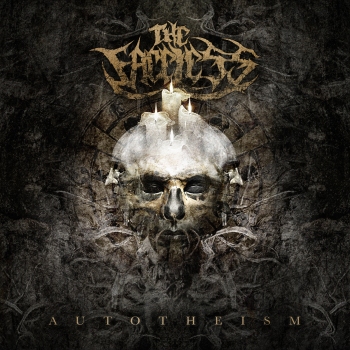 the cinematic and building climactic atmosphere leading into the heart of the song with power and compulsive intrigue. The track is the first part of an overall piece called Autotheist Movement and as it spreads its arms immediately hits with the first surprise. The clean and it has to be said impressive vocals of Keene which heat the air with expressive tones. He is prowled around by the hungry guttural growls of Ficco for a great contrast and union, the music complimenting with a predatory stalking through riffs and energy within a slow burning melodic flame. The track is unexpected bringing a sound which the likes of Tool or Deftones would not turn their nose up at and with an underlying menacing snarl to keep things on an edge. Long time fans of the band will possibly be split on the new directions within the album but already the opener offers even in its relatively straight forward guise something wholly unexpected yet impressive.

The track has an abrupt end but before you can think about a breath Emancipate explodes its venomous presence forcibly into the ear. Nightmarish and with a breath dripping hellish ambience the track crawls and festers within black corners and malevolent shadows before fusing in intricate progressive surges and melodic distractions. Once more the bile spewing growls of Ficco swap with the vocals of Keene this time backed by female vocals, they have not so much a duelling companionship but an exchange of extreme whispers. The guitar of Keene leave scorch marks across the sky of the song whilst Hauch blisters flesh with riffs as dehabilitating as the intensity spawn all backed by tight muscular rhythms from Brewer and Cooper.

The likes of the stunning Accelerated Evolution and The Eidolon Reality, a track which sears itself into the ear with a sonic branding which leaves one breathless, throw further towering and aggressive turmoil upon the senses, majestic and vicious in equal measure and for the fullest satisfaction. As each song confronts more and more deviations of sound and ideas are unleashed to make every visit new and incendiary to the emotions. This vast diversity emerges with one negative aspect; the creativity within songs never allows a breath or real digestion of the immense sounds and invention at large so that no song leaves a clear impression of its shape and body. Yes certain elements stick like the metallic incision and orchestral synth weaves of Ten Billion for example or the melodic dark grace of In Solitude, but in hindsight it is hard to recollect complete individual identities. It is strange as the album is outstanding and every element only inspires full pleasure and satisfaction but within the unbridled tempest it is where everything stays.

Autotheism is an excellent album which the term technical progressive death metal hardly covers. The Los Angeles based quintet has set a new bar for others to contemplate let alone emulate with an album sure to split views, then again The Faceless are probably used to that.