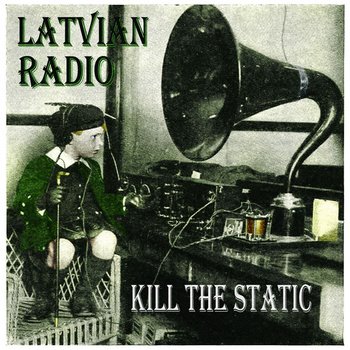 Kill The Static is a vibrant and infectious slice of power pop/rock from US band Latvian Radio. Their third album, the release offers twelve songs triggered according to its sleeve, by the complexities of the human condition. The album is a light but substantial array of sounds and ideas which easily find a home within the ear and makes for a frequent and welcome companion.

The seeds of the band go back to the solo work of vocalist and guitarist Patric Westoo. After releasing three albums he teamed up with long time friends in multi instrumentalist Kim Monday, guitarist Mark Poole (63 Eyes and Phantom Six), and Brian Porterfield (Cheap Truckers Speed), the quartet becoming The B-Sides in 2002. Their album Troubleshooting the following year met with strong responses to its short crisp punk and rock fired songs. For their second release the band decided on a change of name and became Latvian Radio. The line-up changed and evolved but the releases only increased the acclaim and attention upon the band. 2006 saw the release of Happiness Above A Hardwood Floor with Seven Layers Of Self Defense coming three years later, both drawing strong coverage and exposure in media and radio play as well as comparisons to the likes of Elvis Costello & the Attractions, the Replacements, Brendan Benson, Big Star, early REM, and the Decemberists.

Released via Belpid Records from Sweden, the new album is a continuation and expanse on its predecessors, the songs an insight into the psyche of prolific songwriter Westoo drenched in waves of melodic enterprise and dense energies. The title track opens things up and is a fully infectious and irresistible pleasure which grips the heart instantly with its jangly guitars and warm caressing vocals. Keys swarm with a heated elegance around the enthused core of the song adding to the expressive pop melodies and enchantment. One can see why people issue comparisons to artists like Costello when describing the music of Latvian Radio though this song reminded more distinctly of Martha and the Muffins in context of its melodic touch and buoyant keys.

The following Cigarettes & Soda has a Kinks lilt to its summery and inviting pop sounds and already shows the strong and impressive array of diversity within the sonic and melodic umbrella of incisive imagination the band are noted for. The likes of Sons & Daughters with its air lighting crystalline kisses, and the feistier power pop charge of Dead Weight continue the wide menu of sounds and invention giving pleasure all the while.

Again bringing another unique aural dish to savour, So, You Want To Make Me Believe takes the listener on a ride through surf pop, its layers of warm touches  siren like amongst the lapping waves. As the album settles further into the ear with the horn veined Out Of Your Mind and the blues gait of Inwood Park playing before closed eyes, one can almost drift off into a world of sun and glowing multicoloured skies.

The album is a fine example of power pop at its very best, intelligent and well crafted by musicians at the height of their imagination and creativity. If warm climes and golden melodies are your kind of distraction then Latvian Radio is definitely the soundtrack you need.