Home › Music › EP › The Mouth Of Ghosts: When The Sun Sets EP

The Mouth Of Ghosts: When The Sun Sets EP

The title track off of the When The Sun Sets EP from UK band The Mouth Of Ghosts, has enchanted and mesmerised us here for many weeks so the anticipation  going into this their debut release was greatly heightened. The five track EP proved those elevated expectations and hopes were still an under estimation of what was to emerge. When The Sun Sets is simply immense, a consuming and intense weave of atmospheric elegance and creativity brought with a sinister air to leave one immersed in darkened beauty.

The music of London-based The Mouth of Ghosts is generally tagged as a fusion of alternative rock and trip-hop and though that is accurate in many ways there is so much more to them than that. Their music is an emotionally textured presence which envelops every pore and thought with an elegance and shadow to ignite the strongest responses. They are a mix of the sky bound breath of Portishead with the indie cuteness of Daisy Chainsaw and the disturbed heart of Deftones. It is a unique and compelling sound which leaves one basking in intense beauty and swimming against a tide of inciteful energies and passions.

Formed in 2011 by guitarist Simon Langford and bassist Marco Italia with vocalist Alla Seydalieva joining not long after, the band began working on their distinct sound. Taking their name from a Dillinger Escape Plan song the band soon expanded as their sound grew its own evolving life with drummer Phil Page joining the end of last year and March of this seeing Valerie Deniz joining on synth and additional vocals. The Mouth of Ghosts is a band which lingers long after the final note of their music has given its final caress, their music once it takes hold is in every atom surrounding and within the mind and heart, the hours the title track of the EP has laid dormant within the senses easier to count than those it has erupted without warning within.

The song When The Sun Sets is pure aural majesty, arguably the best song to emerge this. Its initial restrained guitar

play gives no warning of the infectious and deeply touching sound to come but once the voice of Seydalieva begins her gentle stroking of the ear and beyond, one is soon wholly hypnotised. Her vocals are simply stunning and she one of the finest singers to emerge in recent times. She has a range which only ignites fires of adoration and has a strength in her gentle and feistier intense delivery, which is unrivalled by most. The bass of Italia brings a vibrant shadow to the stunning affair, his presence adding depth to balance the solar embrace of vocals, keys and guitar imagination. The track is stunning, one of those songs you would cross deserts for, its atmosphere and darkly tinged breath an equally heated landscape.

The song still reigns supreme and heads the release in all aspects but the other songs making up the EP are no less impressive and involved for the senses. The following Patient is another slice of brilliance. It is a harder edged and shadowed track than the opener but no less intrusively consuming. The slow crawl of the song with the vocals teasing and taunting with verbal fingers of liquid gold, wraps itself around every part of the body. The song takes a slight breather midway to allow the gathering of energies to erupt into a raging fire of passion for a musical tempest of explosive invention. The track bristles and strokes with equal strength to leave one further breathless whilst deep in imagery and personal passions. 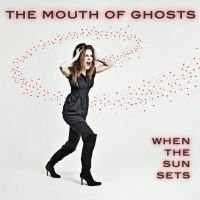 The next two songs World’s End and Close show the diversity of the band within their overall rapture of sound. The first is an emotive cry with a disruptive almost corruptive handling of the senses from the guitars and agitated rhythms behind again openly striking vocals. The electronic weaves offer comfort to words and ear to temper the corrosive sounds as the band show the skill and ingenuity of their songwriting and its realisation. The second of the pair is a shimmering haunting piece of imagination which bewitches as it takes one into an unsettling place of melodic grandeur. Again the band has a special ability to bring beauty tinged with danger and dark intensity as warm as the sun.

Closing with a cover of the Deftones track Digital Bath, a song which from its understated start evolves into another fully absorbing and remarkable wash of intensity, When The Sun Sets is simply musical excellence. The Mouth Of Ghosts is a band destined to greatness and we get the real thrill and honour of sharing their ascent.