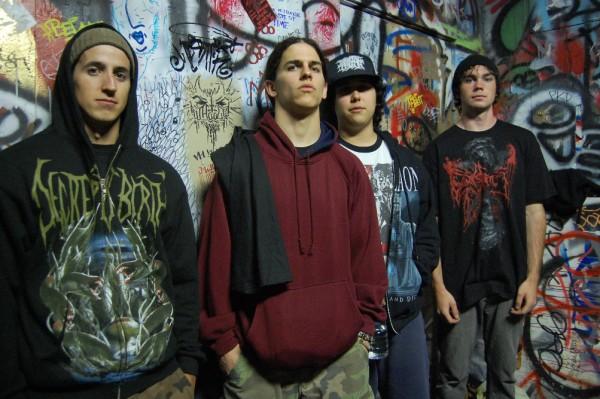 Brutal and destructive with a technical violation as corruptive as its intensity, Severing Humanity is an impressive debut album from US death metal band Deadly Remains. It is an album which leaves one crumbling under its assault and at times hypnotised by its invention and intelligent enterprise for full satisfaction and to set an even greater promise for the band ahead.

Formed in 2006, the Santa Rosa quartet first drew a concentrated attention with their 2008 demo Moral Crusade. This gave them a platform to build a strong fan base through gigs around California. The following year saw the release of Before The Nothing and a marked progression in the skill and sound of the band. From that point the next few years offered the band shared stages with the likes of Napalm Death, Flesh Consumed, Sepsism, Colonize the Rotting, Septycal Gorge, Cerebral Incubation, Condemned, Embryonic Devourment, Putrid Pile, Arkaik, Pathology, Inherit Disease and Vulvectomy as well as a show supporting Pathology at the famous Whisky A Go Go. The band spent 2011 working on and recording Severing Humanity which is released through Deepsend Records and seem destined to explode into a much wider recognition with this aggressive and striking introduction to the world.

The foursome of vocalist and guitarist Ian Andrew, guitarist Josh Kerston, bassist Chris Dericco, and James Royston on drums, are a band going by Severing Humanity, which has no place for mercy in their vocabulary. The album from first note to the vicious last ruptures ear drums and violates the senses with a deep glee which soaks every sound. The album is oppressive at times, almost a punishment too far but brought with an accomplishment which is unmissable and invention which is compulsive. Admittedly a lot of the uniqueness and intelligent play is lying beneath the raging wall of noise which crushes all in its path but for the effort needed to reveal all the quality on offer the rewards are greater. 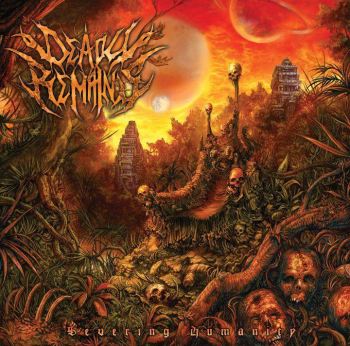 rhythms of Royston and the incendiary guitar play of Andrew and Kerston. The riffs rip air and flesh asunder whilst the sonic flashes flay the ear with no regard for respect. The track bombards and bruises consistently leaving no time to blink let alone breathe and squeezes tighter and tighter with the onrushing consumption of intricate play and violence. Every aspect of the track is immense but the bass work of Dericco is stunning. As ultimately proven through all tracks the musician is a future legend in the making, his lines and sounds a constant snarling beast which gnaws and chews on the senses with intensity and technical aggression which leaves one smarting and drooling in pleasure.

From the tremendous start things only get better, the following Cosmic Necrosis is a track almost indescribable in its intensity and malicious ingenuity. From the opening bass rummage through the ear into the dehabilitating riffs and rhythms the track is like watching decomposition on fast forward. The sounds and intensity falls from the atmosphere like flesh from bone to pool in a torrent of raging malevolence. The searing guitar play which attacks after the onslaught has left its toll is a scarring pleasure to further open up the sores and all combined together makes a corruptive pleasure to immerse and drown within.

Lyrically who knows what is going on, the vocals of Andrew as ferocious as the sounds and just as rabid so no word finds clarity but it is their texture which is important and that is a valuable companion to the cyclonic force around them. Further songs like Instincts Of Flesh, Psalm Of Impurity, and the excellent closing title track,  continue the sheer turbulence around and within the listener, but every song on the release is powerfully satisfying and leaves one with great expectations for further efforts from the band.

There is a similarity across some of the album on the surface which only real focus disperses but it is not a major issue as that sound is so strong. Deadly Remains and Severing Humanity will delight fans of the likes of Gorguts, Disgorge and Suffocation but all death metal lovers will find plenty to feed upon and be excited by with the album.