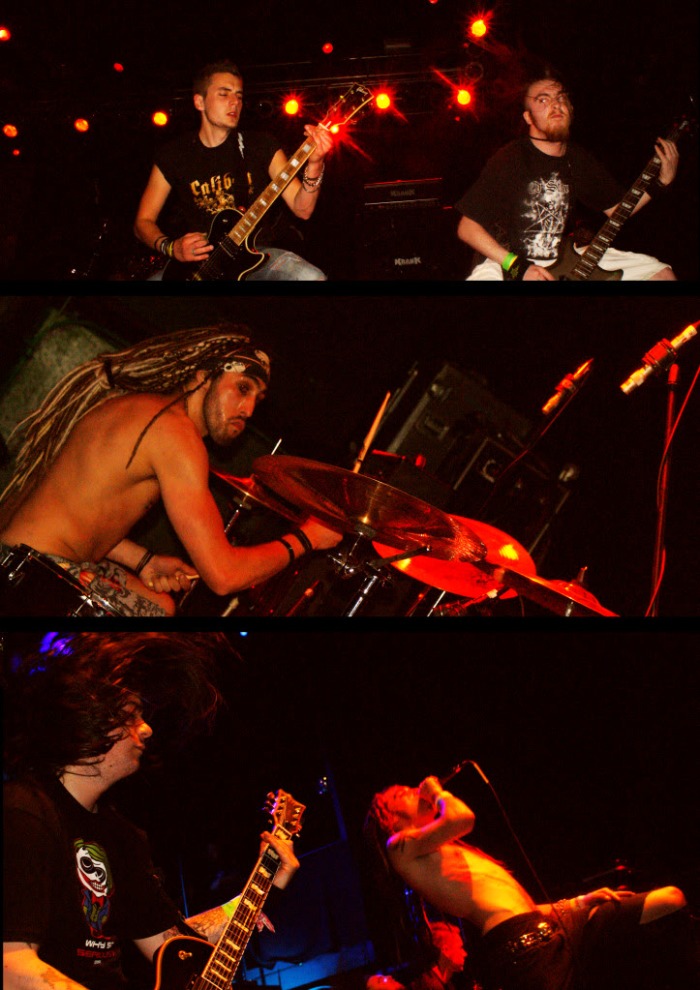 UK metal band Severenth since forming in early 2007 has built a strong and continually increasing reputation and following in the UK though they still have yet to make the big break through.  It surely is only a matter of time as they create sounds which are powerful and stirring with strong invention and imaginative enterprise as shown with their excellent album Reveal. Though released last year another look at it for new comers to the Chester based quintet is definitely in order as we try to do our little bit in sharing not only a strong and impressive band but one with immense promise within their skilled hands.

Over the past few years the combination of vocalist Peet Bailey, guitarists Ste Ensall and Adam Sidor, bassist Ben Jones, and drummer Dave Roberts, has made a definite and impressive mark on UK underground metal with their 2009 debut album The Age Of Paranoia and the blitzing of stages around the UK with their cluster bombs of aggressive and sharply melodic sounds. The year of their first release saw the band also winning the Playmusic UK best unsigned metal act whilst across the years to date they have shared and lit up shows alongside the likes of Skindred, Il Nino, Kittie, Soil, Hed p.e., Bring Me The Horizon, 3 Inches of Blood, Biomechanical, Trigger The Bloodshed, and Panic Cell to name just a mere few. America buckled under their assault in 2010 where the band played the likes of Hells Kitchen and the Cedarwood Dome and last year saw Severenth hitting up and devastating Hammerfest Prestatyn, HRH Ibiza Roadtrip and Wacken Open Air. It also was the time of an even more important event in the release of Reveal, an album which shows there is a fresh wind waiting to create a storm within the metal scene in the UK.

and well crafted metal. A growling cry introduces the onslaught to be followed by sumptuous demanding riffs and ear spattering rhythms. It is the vocals though which grab the attention at first, the twin caustic and clean attack of Bailey exceptional and dripping spite drenched attitude. The song takes breathers with unexpected but outstanding melodic asides but as a whole the track is a driven and towering opener which excites deeply.

Often such a strong start finds a dip in its wake but Cover Your Mouth easily maintains the high octane start with its collective storm of riling riffs and inescapable intensity. Stalking melodic surges from the guitars fire up the air whilst the vocals offer a more overall smooth approach though plenty of the great scowling elements prowl the song too. Slightly less contagious than the first track it continues the excellence with accomplished songwriting and stature.

The following caustic predator called Taken The Fall and its equally ravenous companion In Air They Dawn rampage across and through the ear with skill and might. Both songs with a tumultuous series of oppressive rhythms and knee weakening riffs with little mercy in their intent though the near brutal combative consumption is  tempered by the stunning heated guitar solos and scorching melodic invention. Again the vocals are striking and though preference prefers the harsher and distinct delivery there is no question Bailey is adept and effective with his rounded range and style.

The best track on the album is Not Worthy, a song with classic written through its core. From an excellent opening throaty bass presence the track accompanied by instantly mesmeric melodic play, expands its arms with an electrified unveiling of its weapons before exploding into a hypnotic stomp of addiction forming grooves and battering rhythms. Further irresistible guitar play and irrepressible energy drives the track deeper into the heart and provides more evidence of a band on the verge of something special.

Two Mirrors and Born To Suffer simply leave one drooling in contentment as the album to its last note provides melodic metal in its finest form. To be extra critical there is not a remarkable uniqueness about the band yet though one can say that about plenty of the ‘giants’ to be fair, but as the album proves the band are still a distance from their full potential yet which with the great quality and sounds within Reveal, is a truly exciting prospect. Severenth will be a major force ahead, if it is sooner or later is the only question.