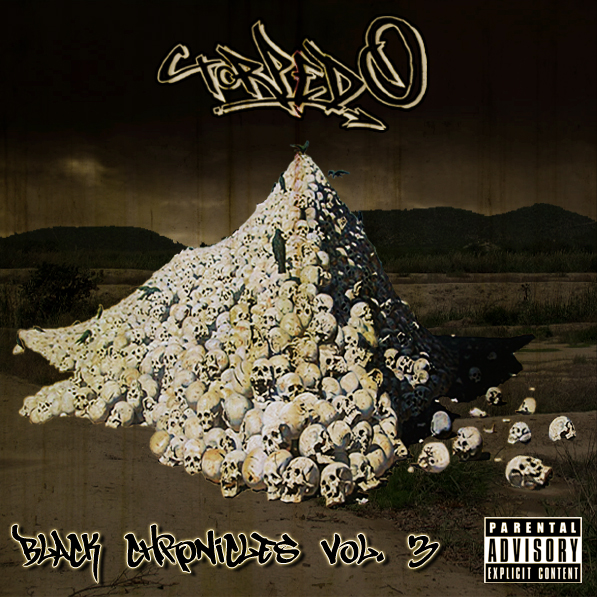 Having been previously impressed by the first two releases in the series the anticipation for Black Chronicles Vol.3 from Torpedo was keen upon news of its release. Once more bringing the dramatic instrumental sounds of Torpedo Beatz into a union with the rhyming and MC skills of varied rappers the release continues the impressive levels and inventive sounds as found on the first pair of instalments.

Serbian musician and composer Torpedo Beatz has a distinct almost cinematic style to his composing, his pieces bringing an often haunting and always enthralling feel and emotion to the songs. The new collection of tracks is no different, his music bursting with tension and magnetic melodic invention to compliment and explore the hard hitting expression of  emerging lyrical and rapping talents from around the world.

Some of the highlights of previous volumes of Black Chronicles has come with the pairing of the composer with the excellent and always powerful American rapper Wrath. The new album sees the track Requiem For A Sell Out repeat the team up and success with the featured addition of Maniak. Off of a slowly dawning opening with the words as belligerent and combative as you could wish, the duel vocal attack punches forth intent and strong views whilst the music wraps around them with a glowing and tight grip. With a slight Twizted feel to the piece Wrath and Torpedo still leave most in the shade when they combine.

Another impressive artist who is introduced on the album for the first time is Dark Guerrilla Chato and his Dark Guerrilla Chat crew. From Orange County, Southern California, they bring four powerful standout songs to the album. The first Wicked Violenze with a Halloween tinted horror sound pulsating behind the aggressive and angry attack is a strong first meet without lighting any flames of passion but it does not take the following Revenge, Dark Melody, and Barbarious long to hit the deepest spot. The first of the three immediately offers a growing menacing atmosphere from the music to encompass the malice spitting rapping and intimidation within every syllable. It like the first song from the crew is a notable entry without leaving deep scars but the remaining duo fix that aspect with sure intent. Dark Melody the best track on the whole album, bitch slaps the senses with concise and malicious rapping whilst the music scythes through the ear with dramatic breath and sonic borne melodies whilst Barbarious bruises with further hardcore lyrical directness and almost niggling melodic enterprise from Torpedo. Like the team up with Wrath this is a union one hopes to hear a lot more from in the future.

The three tracks with Lemmy MC, a crew from Rottenburg am Neckar in Germany, are a lighter affair than those with Dark Guerrilla Chat, though still with an abrasive attitude to leave a good antagonistic taste in the ear. Musically the songs Hard 2 Da Core, Horrorcrunk, and Battle Continue are shaped to the distinct rapping and vocal attack bringing a blackened carnival like feel, its air and energy dangerous and caustic. The tracks though not quite finding the strength of those already mentioned, leave one eager to hear more and fully satisfied.

The release is completed by Pali Andjeo with Serbian crew 2B4 Time who also featured on the previous volume of the series, and instrumental pieces from Torpedo which as always seem to light up parts of the senses and thoughts which most bands and artists fail to discover.  The 2B4 Time track is a slowly enveloping brew of distressed ambience veined with good vocals skills and imaginative sounds whilst the solo compositions could grace and soundtrack any dark hearted cinema treat or intensity driven emotion.

Continuing the established quality of previous releases, Black Chronicles Vol.3 is an excellent album which shows some of the best of the underground rap talent around the world alongside the inventive imagination of composer Torpedo. If you are looking for some fresh and different from rap and hip hop flavoured music than this album is an essential investigation.