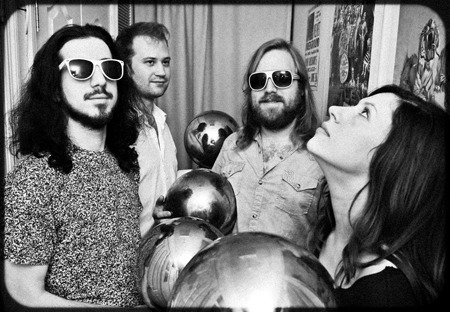 When an album leaves one feeling good inside you know it has to have something special about it. Such is the case with Meridia from US rock band Ellis Ashbrook. The release, the third album from the band, is a mesmeric collection of swirling and heated songs which captivate with ease and infectious imagination. It is an instant friend to the ear and an eager perpetrator of heartfelt delights with its irresistible weaves of invention and passionate melodic enterprise. A series of varied peaks without any lows in between Meridia is simply one enormous pleasure.

The Brooklyn based quartet of John Barber (vocals, lead guitar), Natalie Lowe (vocals, keys), Jonathan Granoff (bass), and Alex Major (drums, electronic percussion), draw in influences across multi genres to create a rock sound rippling with diversity and shimmering beauty. It is feisty when it needs to be and as funky as your hips could dream of and the overall blend is a perpetually engaging and fresh pleasure for the senses. With two previously well received albums behind them in their self titled debut of 2006 and Assemblage in 2008, Ellis Ashbrook has taken their sound to a new level with their latest album to be reflected in the what one expects will be even greater acclaim going its way.

The album immediately infuses emotions with full enthusiasm through opening track Accelerator. With a dawning 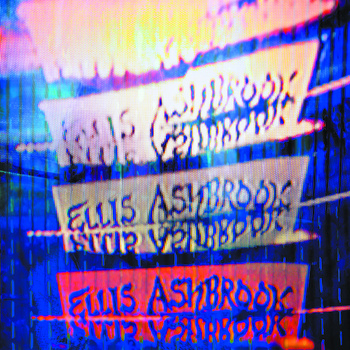 electronic breath the song unfolds its arms to envelope the senses with a mighty indie pop feast of elegance. From the initial voice of Lowe there is an immediate Blondie lilt to the song before it evolves into a more rock orientated flow as the vocals and excellent guitar of Barber join the party. Electronic bursts and spotlights of sound keep things wonderfully warm and casual alongside the firmer thrust of the song which by this point and as it approaches its climax ripples essences of Oingo Boingo.

Second song Slide takes no time in showing the variety of the album and music of Ellis Ashbrook in general.  A pacing melodic tease split with sharp guitar play and surges of muscle the song is a hypnotic fusion of Alice In Chains/Nirvana and classic rock brought with a breath of psychedelic warmth. Again vocally the song radiates infection and class whilst musically the band turns contagion into an art form.

As the album continues to envelope the senses songs like the jazz funk flight of magic which is Cat Song, the brilliant hypnotic tropical treat Peripheral Declination, and the crystalline shimmering No Please, Don’t Watch, leave the heart desperate for more. Peripheral Declination is especially irresistible and a rival to the opening pair for best song on the album, its magnetic Mike Patton crossed with Beck craft impossible to stay away from.

As mentioned there are varied heights of excellence on the album but there is never a time the album leaves one merely satisfied, songs like Climax, the folk rock gem Unbreakable, and the emotive Bottomfeeder, leading thoughts and emotions on a sensual experience as rewarding as the more boisterous and irrepressible tracks elsewhere. As Meridia progresses its air evolves from an urgent and energised beginning into a mellower and more passionate atmospheric ambience especially over the latter six or so tracks, though it still offers plenty of stirring bursts as in the closer 22 to compliment and invigorate the pulsating beauty and impressive songwriting.

Taking extras spices found in the likes of Talking Heads, Led Zeppelin, The Smashing Pumpkins, Ween, and Pink Floyd to name a few, Ellis Ashbrook manipulates them into their own unique sound to offer something which is as we said at the start rather special. Meridia is a gift for the ear, time to treat yourselves.

Like Loading...
‹ Karybdis: From The Depths
Kids We Used To Be: And We Would Have Gotten Away With It Too… EP ›