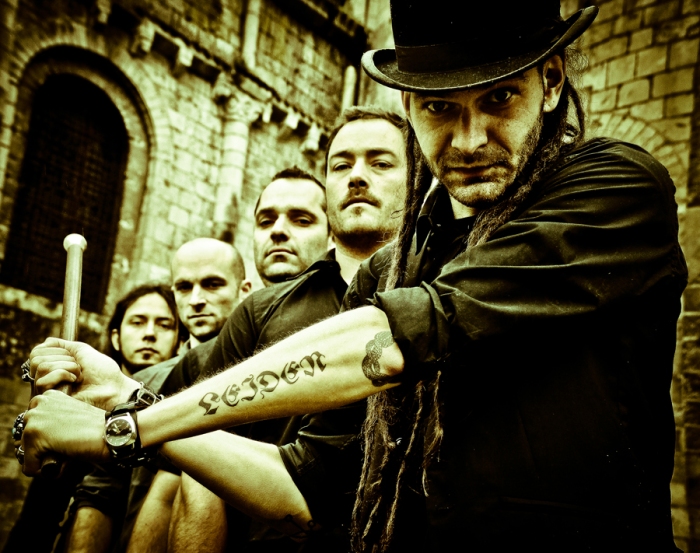 With more instinctive groove in their blood than should be possible French death metallers Trepalium has unleashed one of the most absorbing and pleasing albums so far this year. H.N.P. is arguably not the richest in innovation or an openly ground breaking release but no one can deny it is one of the most intrusively infectious and compelling. Named after the ancient torture device Trepalium like its namesake shows no mercy, the band seizing the ear with riotous aggressive riffs, direct and manipulative technical venom, and the sweetest grooves let loose in an extreme metal release.

Released through Klonosphere/Season of Mist, H.N.P. is the fourth album from the band and as the promo states “H.N.P” will enclose brilliantly the triptych started with “Alchemik Clockwork of Disorder” and “XIII”. A true journey with dense and deep concept albums whose words reflect and complement the musical complexity and intensity.” To be honest the album is our introduction to the band, a long overdue meeting on the evidence of such an impressive release, so to discover the full journey will be a retrospective experience but a destined one because of H.N.P.

The album starts with the title track, Heic Noenum Pax and instantly rips the attention from elsewhere in its direction.

The brewing intensity and tension leads into intimidating riffs and the growled malice of KK. As the track unfolds with an ever present attitude the guitars of Harun Demiraslan and Nicolas Amossé tease and intrigue within the commanding rhythms of Sylvain Bouvier and the heavy bass lines of Ludovic Chauveau. Hints of deep grooves are offered without giving any clue to what is fully ahead for newcomers to the band. It is the guitar work though which makes the track magnetic without being overly addictive and creates an inventive start to the album.

The following Prescription of Crisis is a bruising encounter for the senses, its hardcore breath a scathing attack within the death and technical metal violation. Brief and uncompromising the track leaves one enthused and though distinctly different it continues in the same manner as the opener with again no real hint to the opening of groove fest erupting from here on in.

Slave to The World blisters the senses from the first note with a groove to send sphincter muscles contorting in delight. The guitars drive straight to the core to twist and manipulate every cell like maniacal whores, every note a seductive and irresistible surge of wantonness. To be honest you have to listen to the songs a few times to appreciate the other great aspects of the song such the lure and addictive nature of the groove which spines the song. Vocally thoughts grab a Pantera feel as too at times does the music, this a recurring thought throughout the album though it is just another delicious spice to the album. With breath taking rhythms puncturing the ear incessantly the track is immense.

The next song Order the Labyrinth sees a progressive metal air brought to the senses its atmospheric skirting of the ear making an imaginative companion to the decisive aggressive nature stalking the senses. With a less defined but just as effective grooved vein the track is an evolving expressive piece with an inventive union between the eager to break free destructive urge and its well crafted melodic breath. The track shows the strong variety on H.N.P. even if it again is not the deepest infection on offer.

That is left to Insane Architect, the best track on the album. Another salacious groove permeates the song but it is the outstanding diverse vocals and scorched guitars, especially the solo, which makes the song so impressive. It is a track which never sits still in its invention and desire to leave the senses lusting for its aural addiction. The song pimps its hooks and lures like a greedy dealer but there is nothing light or cheap about what is an immense piece of metal.

Further tracks such as Let The Clown Rise and the corruptive I Was do nothing to lessen the deep satisfaction and with it closing on a cover of the Pantera track I’m Broken, the album is pure pleasure. One did expect that maybe the band would have churned up and reinvented the cover but they do such a great if straight forward job it is hard to be critical.

Trepalium with H.N.P. has delivered one gratifying and stirring album. It does not rip up the rule book but does make it the most compulsive read.