Lazer/Wulf : There Was A Hole Here. It’s Gone Now 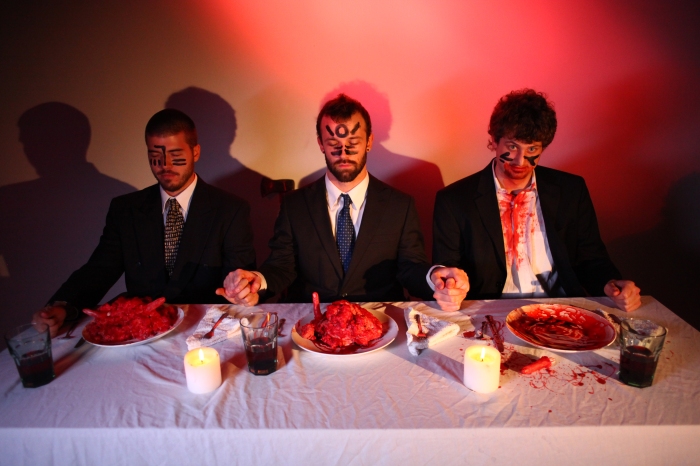 It has to be said that the There Was A Hole Here. It’s Gone Now EP from Georgia band Lazer/Wulf is one remarkable release, a stirring and intriguing piece of songwriting and realisation. The EP, barely touching twelve minutes in length contains four tracks making one full, continuous, and evolving emotive experience which is individual to each who immerses themselves in its powerful presence. It is a release which no matter the original premise and theme which the artist represents with its sounds, instigates a personal vision and journey which changes and finds its own evolution the more one spends in its company.

Lazer/Wulf is an instrumental band who occasionally use vocals as another element not a focus. From Athens, GA, the trio of guitarist Bryan Aiken, bassist Sean Peiffer, and drummer Brad Rice, create an involved form of progressive metal fused with distinct and varied strains such as sludge, jazz, technical metal, and more. Their music is wonderfully unpredictable and impossible to bring any expectations to, except that from the evidence of There Was A Hole Here. It’s Gone Now it will be something unforgettable. Their sound is dense and rich in consumptive originality without becoming painfully intrusive, its heart and breath a perpetual trigger for individual thoughts and responses.

Originally a quintet the band has consistently grabbed strong attention through their live shows and striking releases, 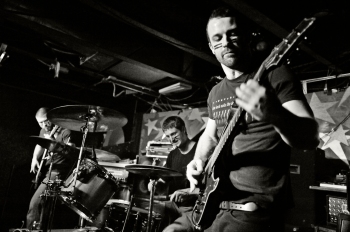 which led to them in 2008 being acclaimed Athens Band of the Year. 2006 saw their debut demo Demo-Lition! taking no time in making its mark in the ears of local music lovers, but the line-up changes, some enforced, saw the band reduced to a threesome and the challenge of re-interpreting their immense sound without losing its might. 2009 saw the release of their full debut The Void That Isn’t, its strong and impressive sounds a declaration of the new Lazer/Wulf though this also was followed by losing another member. A long search led Aiken and Peiffer to the eventual discovery of drummer Rice in 2011 and finally the band was set and began working on There Was A Hole Here. It’s Gone Now.

Opening track We Will Meet Again teases the ear from the start with a brewing atmosphere which beckons without revealing its intent merely offering a sense of something big impending. As it flexes its mass a throbbing hungry bass begins lurking behind the mesmeric guitar intrigue. As it lifts its energy the rhythms become eager and excitable and even in the restrained moments when vocals add their breath the track is pulling at its reins. Eventually the song breaks free and we are treated to a storm of urgent energy, striking melodic prompting, and feisty rhythms. The track awakens thoughts, its warm yet open sense of finality inspiring ever changing interpretations of personal imagination.

The piece turns into a muscular beast as it emerges as second track Song from the Second Floor. Whereas the first track has a Mars Volta like gait here it brings an angrier intensity to its energy, a thrash laced metallic presence. With the guitars surging with purpose and again the bass a ravenous presence, the track is an initial inciting bruise of pleasure. Taking a step back to assess the situation the song offers a lull before it builds to its climactic chaotic riot upon the senses. Chaos breaks out as a battlefield of emotions, sounds, and intrusive atmospheres collide in ingenious invention, the track having the feel of an all powerful element standing over the enraged mayhem within its shadow.

Bones of the Youth is the portrait of this bedlam of creativity and intensity, its air paranoid and defensive but with a corruptive defiance. Each listen to the piece brings a difference thought, its varied metal veins incendiary and irresistible. Emerging from the venomous atmosphere the equally distorted air of Morgue Nest brings the EP to a unforgettable climax. With combative rhythms and aggressive riffs rippled with malevolent guitar play the track is the final statement. Whether it is a full finality or the spring board for another development you decide as it and the whole EP leaves you breathless and desperate for more.

The There Was A Hole Here. It’s Gone Now EP has to be heard as a whole for its fullest glorious effect to be felt and enjoyed, though individual tracks will still leave all metal and rock fans quivering with excitement. Released also on vinyl and cassette with the bonus instrumental It’s Gone Now, the EP is one of the most impressive things to come our way this year, and Lazer/Wulf one of the most exciting bands.