Damn Damn Patriots play buzz-saw pop or to give it an image, it is like having an aural visit to the dentist with an insistent and perpetual drill resonating within the senses. It is something quite simply sensational as proven by their new album Duke It Out with Damn Damn Patriots. Consisting of ten tracks spanning a mere twenty two odd minutes in true punk fashion, the album is an unapologetic brew of pop punk, garage punk, and roughened pop, basically a feisty feast of rock n pop and punk n roll. It is irresistibly infectious, a sonic contagion as virulent as any air borne germ with open mischief at its insatiable heart.

Damn Damn Patriots are a quartet from Reading, UK who originally formed as a three piece warm up band for a local venue, the Know Your History Club. The band evolved to a quartet of vocalist and guitarist Jason Applin (also of Union Starr), guitarist Kev Wells, drummer Patrick Bingley, and bassist Mark Smith, though he has recently left the band, and with a back to basics air recorded and mixed the album in just seven days. This instant and uncluttered premise gives a wonderful raw energy and excited breath to each and every song on the release as well as a nostalgic prompt back to the days of do what you want punk.

The teasing opening chords of Keep Swimming, instantly grabs the ear as it bursts into the first of the parade of reverb 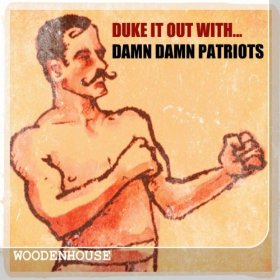 and discordant soaked songs. With a garage punk sound of scuzz and impetuous energy the track is a far too brief slice of trashy excellence and the perfect opener to what emerges as one of the most exhilarating releases this year so far.

The high quality is continued and raised by the following A Bible And A Bottle of Pills. A hook as infectious as any Pete Shelley has ever conjured entices the ear initially and is a frequent tease throughout another electrified burst of scantily clad melodic wantonness. With a bruising bass line and scathing guitar tones the song is a feverish rascal of distorted sixties garage sounds.

Bam Bam lets the peddle lift a touch as the reverb knob on the vocals of Applin is taken to its fullest resonating level, its fall out a niggling added pleasure alongside highly pitched additional vocals. A thumping rock n roll stomp it makes a great appetiser for current single Family Unit. It also is the first to exceed two minutes; in fact it goes the whole hog as it wickedly extends its electric swarm of noise to beyond 3 minutes.

Family Unit is an outstanding song and makes one wonder if The Monkees had found their origins in this decade whether this is where they would have been musically, the song having that same pop contagion. The song has a statically charged breath which sparks only the strongest pull towards its riled pop air.

Tracks like the emotively charged This Is The Song That You’d Expect Me To Write, the summery over heated melodic first single Do The Sell Out, and The Fall meets The Pixies blistered pop gem State Of NY with wonderful additional female vocals, well we think they are it could be just a band member squeezing tightly, all leave one excited and immersed in a cloud of satisfaction.

A couple of the biggest highlights come in the songs Blood On Satan’s Claw and In The End. The first with an underlying riff which shouts The Clash anthem White Riot is again a far too short, you evil people, track of brilliance. The song scratches and pleasures in equally majesty and despite its short existence is an adrenaline fuelled ignition switch for the overload of the senses.  The second of the two is a mesmeric blend for the first time of full smoothly toned vocals against a back drop of hazardous scuzzy bred caustic melodies. Both tracks are outstanding in what is an album of continual uncompromising magnificence.