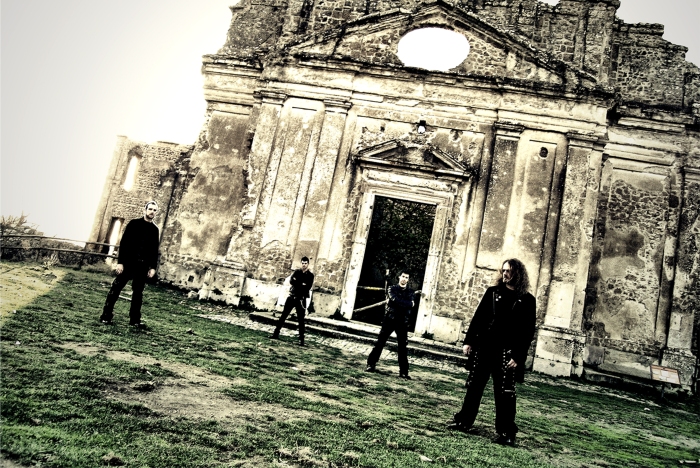 After an initial uncertainty about the release the debut album from Italian rockers Lykaion emerged as one strongly pleasing and enjoyable slab of blended metal and rock. Nothin’ But Death is a stylish mix of heavy metal, hard rock, thrash, and melodic metal. It arguably does not offer anything new to metal sound wise but has a fully loaded adrenaline driven heart which is irresistible.

As mentioned first contact left an uncertainty which was wholly down to the vocals of Alessandro Sforza. Now he is not a bad vocalist, far from it but suffers from just having one of those singing voices which personally grates. He has an unfortunate effect of making ones senses bristle rather like sucking through a straw, oh that is just me too? He is a very good vocalist we just needed to put any words into context which maybe lead to a differing impression.  Musically the band hit the mark instantly and persistently, the twin guitar creativity of Sforza and Fabio Valentini impressively incisive and imaginative whilst the bass of Alessandro Esposito is an impactful and at times brooding force behind. Add the formidable drumming of Andrea Alberati and you have a quartet which delivers melodic metal to consistently intrigue and excite.

From Roma Lykaion formed in 2003 with the likes of Sentenced, Katatonia, and Nevermore inspiring their full and uncompromising brew of strong sounds. Their debut EP of 2006 The Things I´ve Left and its successor the Swallowed By The Sea EP, drew strong interest and response to confirm an already impressive acclaim for their live shows throughout Italy. With the band recently signing a deal with Bakerteam Records for the release of their first album, one gets a feeling their time to break into a wider audience and recognition is now especially with the strong and overall impressive sounds within Nothin’ But Death.

and muscular riffs. That melodic touch is persistent though and permeates the powerful surge until it subsides for the more gentile face of the song to take centre stage. The vocals of Sforza come in and the senses are unconcerned and it is not until the song and he shows a greedier intensity that he receives his undeserved resistance. The song though is a great stomp across the ear with carefully crafted guitar play intertwining with heavy weight riffs and energy. It seems briefer than it actually is but that is soon forgotten as the rampaging A Cold Summer Day confronts with again a powerful aural attitude and expertly structured melodies and harmonies. Lykaion have an impressive ability to bring a unique and persistently successful seamless union of tumultuous heavy shadowed sounds and startling melodic beauty, each at ease when hand in hand without any diminishing of their full effect.

The outstanding Free From All Your Fears carries on the great beginning though its successor takes a large step back but that is undoubtedly down to again the unintended personal response to the vocals and the song being a power ballad of sort, he had no chance really.

The heart and best moments of the album comes in a consecutive trio of tracks and they alone ensure the release is worth more than a moment of any ones time. The first is The Dance which has a devoted  fan just from its heavily grizzled bass line intro. The feisty incessant rampant riffs and prowling breath of the song only goes to concrete the instant response and as it expands to its full height the song is a contagious confrontation of stirring riffs, depleting energy, and scorching melodic guitar.

The following Fuck You (I Love Myself) and Passion Kills in their own distinct ways build on and accelerate that enthused reaction. The first is a defiant storm of contemptuous riffing and unapologetic emotion, its middle finger presence brought into clearer context by the wonderful almost inciting melodic touches and imagination. The second of the two is the best track on the release, its relentless dark niggling riffs and greedy purpose completely infectious. The track twists and winds around the senses with the firmest hand and most instinctive heart to ensure nothing but adoration its way, and at one point even the vocals found a friend.

With further songs like the excellent Sick Love and Dimenticherai to ensure nothing but satisfaction, Nothin’ But Death is an excellent release which without venturing into openly new pastures brings one of the strongest and most enjoyable rock albums of the year. Just before we end we just need to say those immortal words to Alessandro Sforza, it’s not you it’s me.