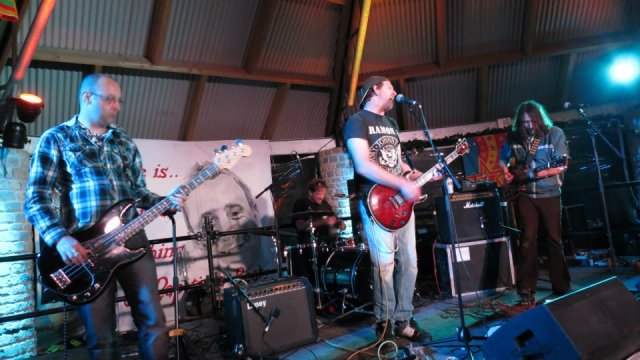 From the unmentioned depths of darker Devon there is something begin to stir and setting greedy eyes on the rest of the UK. This predatory beast of attitude, beer, and aggravation comes in the undiscovered shape of punk rock band Anti-Macassar. Their apparent secrecy is now though becoming under threat as more and more find out about their album Empty, a festering pleasure of rock, punk, and blues brought with an urgency and original punk heart.

Empty is a joy, and though slightly inconsistent and at times seemingly unsure which fuel to load individual songs up 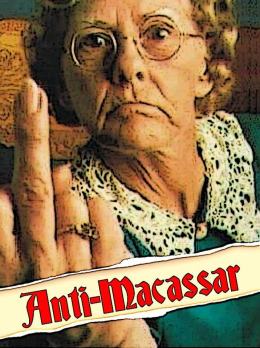 with, it is persistently compulsive and consistently very satisfying. Consisting of Mike Hill (vocals, rhythm guitar), Benny Joy (lead guitar, backing vocals), Garry Dewis (bass), and Andy Higgins (drums, backing vocals), the quartet create music which has no need for or desire to charm and comes with an insatiable appetite to rile up all and sundry in emotion and heart. It is honest fun music, a blend of punk, rock, and garage punk, with an occasional splash of psychedelic blues flavouring to spice things up. It is also perfectly nostalgic revisiting seventies punk and rock with an instinctive surety.

The album bulges with thirteen tracks all hungry to rile up the senses and cause maximum mischief with varying levels of spite. Coarse and caustic, the slices of rock badger and assault with no barrier to their purpose and lyrical intentions and each is primed to grab the fullest reaction it can instigate from its recipient. As mentioned the album has a small inconsistency across its length but with more peaks than dips, and these lesser moments still a riotous pleasure for the ear, it is hard to be too critical on a release treating one to a beer soaked and aggression veined party as good as Empty.

The title track opens things up and feels an odd choice to strike the first blow with. The song is a hypnotic prowling crawl through the ear with sharp melodic guitars and a blues tinged tone coating every note. It is seemingly nothing more than enjoyable but before one knows it the track has craftily captivated the senses, its psychedelic wash as mesmeric as a scorched sunset. It is slightly overlong but never loses its grip on the ear and by its end shows the band is not prone to the obvious and predictable in any aspect of their music.

Anti-Macassar throw up a storm of addictive riffs and greedy hooks next with the angry punk driven Kill Ya. Vengeance driven and expressing the thoughts and heart of more than a few, the track is an infectious stomp with hungry riffs soaked in a southern drawl. It plays like UK Subs meets The Meteors and is an immediate pull with its infectious chorus and unbridled vehemence.

Tracks like the taunting nasty Man Friday offering a mix of Crisis and Art Attacks with a blistering rock solo piercing its heart and Come With Me, a Leyton Buzzards/The Outcasts slab of wanton dirty anthemic joy keeps things continually combative and energised. Further along songs such as Falling Down and Black Is Back keep the attack and punk call loud and forceful too. The first a bare and distressed scuzzed feast of simplistic power recalling Spizz Oil and Dangerous Girls whilst the second swaggers with a grooved garage rock surety complete with sing-a-long chorus and sharp guitars.

These mentioned tracks alone make the album much more than a release to smile at and move on from but with the addition of its two best tracks it easily becomes a must check out. Ignorance Is Bliss saunters in with alcohol swigging riffs and near frenzied energy. Complete with an addictive riff for the chorus which would not look out of place on a Dead Kennedys track the song leads the ear on a boisterous and ravenous crawl whilst fiery melodic guitars and solo spark rapture within the senses.

This impressive track is soon swept aside by the mighty presence of 6ft Locust. The track is proving to be the fan favourite and it is not hard to see why, it is perfect punk rock. With a provocative vocal delivery over teasing riffs and scarred melodies the song is as infectious as they come. Throughout it punches and coaxes the senses in equal measure and once it throws in a Buzzcocks proud melodic hook as contagious as they come the song elevates to classic. With elements of The Adicts and Angelic Upstarts to its blood the song makes the album worth a punt all on its own but backed by an array of other feisty treats Anti-Macassar shows that Empty is no hollow pleasure.