Home › Music › EP › Broken Lungs: We’re In This Together EP

Broken Lungs: We’re In This Together EP

Not yet to reach their first year as a band, alternative rockers Broken Lungs release their debut EP We’re In This Together to inspire firm acclaim and even greater promise for the band ahead. The release may not be the finished article in some ways but stands ahead of a mass of releases from older and more mature bands in quality and melodic prowess.

Formed last August the Liverpool quartet of vocalist and guitarist Karl Eginton, lead guitarist Carl Fitzpatrick, alongside Alex Forde and Mark Highdale on bass and drums respectively, have worked hard and with a defined intent in forming and creating a sound which is as strikingly and keenly melodic as it is energised and passionate. The EP released June 11th, marks their first step into the gaze and ears of the UK and it is not too much of a stretch to imagine the band and their melodic rock sounds making a big and deep impression.

The release opens with the eager and sure We Stand Tall. The song immediately lays out the melodic skill of Broken 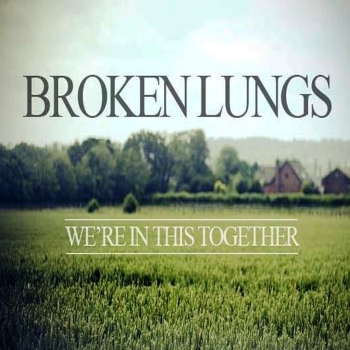 Lungs as the guitars light up the senses amongst firm basslines and attentive rhythms. Though the song arguably lacks a bite to match the likes of Foo Fighters who many have compared some aspects of their sound to, the track has an infectiousness which grows as it plays within the ear. Vocalist Eginton has a great smooth voice matching the clean cut melodies of the song and all combined the song is an impressive start to the release.

I’m Done With Desperation follows next with a harder rock spine and energy. With a great gravelly bassline the song ripples with a deeper intensity against the sharper and more intrusive melodic patterns elsewhere within the song. Though not as instant as the opener the song shows diversity to the sound of the band and their songwriting strength. Again personally more of a snarl to it would have been welcome but it is hard to place any real criticism at its feet.

Next the band brings another assured rock fuelled entry to the release in the shape of Try As I Might. The track is an eager melodic stomp across the ear with more than a tinge of anthemic essence to its breath. It plays with an air of Jimmy Eats World meets Biffy Clyro, teasing the ear with an energetic purpose and emotive slowed down melodic grace. The sound is seemingly familiar which adds to its appeal and captivation, the lure of the song almost siren like.

Closing with the more restrained Alleyways and acoustic Lost At Sea, two songs which show the softer elements of the band though they do not quite find the heights of the other tracks, the EP is an impressive debut and a release that marks the band as one to keep a close eye on. The feeling is though that as time passes and the band evolves one will be hearing plenty of and from them without having to look. UK melodic rock looks to be in promising hands led by the impressive Broken Lungs.