Moonloop: Deeply from the Earth

With a name to offer up many suggestions other than that of a death metal band the first full length from Spanish band Moonloop is ultimately a very rewarding and impressive surprise. To be fair the Barcelona quartet are not your straight forward example of the genre, their creativity emerging in a striking progressive death metal blend with influences in the form of bands like Opeth and Gojira openly on its sleeve. Deeply from the Earth is a bit of a slow burner, the immediate impression is good without being striking but as it progresses the realisation of how deeply it has begun to register becomes apparent. Though probably not destined to dent many top ten lists as the year closes its eyes, the release nevertheless stands tall and is sure to have a lingering place in multiple ears and hearts.

Formed in 2001 the foursome of Eric Baule (vocals, guitar), Juanjo Martin (rhythm guitar, vocals), Raul Payán (drums), and Vic Granell (bass), unveiled their debut demo Things Can Change in 2004 with the same year seeing the band opening for Anathema. With second demo Release from Duality finding critical acclaim the year after and the band playing at the Sant Climent festival in 2006, Moonloop was becoming a noticed force within the metal scene of their homelands. A year on and the band began recording third demo True Nature Revealed as well as lighting stages at Riells Death Metal Fest, Burning Hell Fest and the Move Your Fucking Brain Festival. From that point shows and tours took precedent, the band demoing live many of the tracks that would appear on debut album Deeply from the Earth.

Recorded in 2011 the album is finally released on Listenable Records and with its wealth of quality and thought let alone great promise, Deeply from the Earth is an album that deserves focused attention.  The album like some previous releases is based on Mother Earth as well as life experiences. It has a depth and inventive heart lyrically and most noticeably musically to elevate it above the majority of releases this year and though it and the band struggle to avoid the Opeth comparison especially it is a compliment rather than a flaw ultimately. 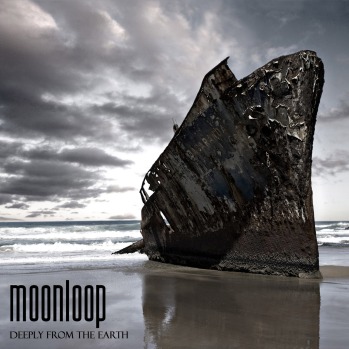 endeavour. Awakening Spirals Of Time and Beginning Of The End both seize the ear with accomplished skill and melodic power, the first a brief and exotic instrumental with an atmosphere sun scorched and dazzling whilst the second is a bruising and heated envelopment of the ear. From the coarse blistered vocals of Baule to the colourful and incendiary guitar play the track licks like a flame around the senses though ultimately it does not kind an ignition point. It is hard to pinpoint which element is missing to deny it the chance to let it truly ignite but it is still a satisfying and welcome treat upon the ear.

As third track A Life Divided wraps itself around the senses something clicks and the album and band trigger something deeper. Whether from the firmer muscular intent, the less fussy melodic play or possibly its shorter length the track hits the mark and steps forth as best on the album. It also marks the first appearance of clean vocals and they bring an instant lift to the song though it is the persistent and insistent groove which really hits the spot.

Fading Faces with further excellent clean vocals against battering rhythms and a resonating intensity leading to numbness, is an outstanding continuation of the immense sounds from its predecessor. As the album moves through the impressive likes of the destructive Legacy Of Fear and the wonderful progressive melodic/semi acoustic/intense darkened blend of Wailing Road the intrigue and pleasure continually outweighs any negatives which arguably exist within the release.

To be over critical at times Moonloop over stretch their progressive passages and solos whilst the longer songs lack the concise touch of the less lengthy tracks but to be honest there is not much to criticise really. Once the band finds a unique sound with its own distinct breath there will be no stopping them.