Post Mortal Coital Fixation is the third album from slam death metal band Kraanium and a festering bruise of corruptive violation and brain numbing intensity. Raw, barbaric, and perpetually intrusive the album marks a return to form for the Norwegian band and a great infestation upon the world before their US tour in June with Atrocious Abnormality and Coathanger Abortion.

Post Mortal Coital Fixation released via Comatose Music follows previous albums Ten Acts of Sickening Perversity and The Art of Female Sodomy. The Oslo quintet of vocalist Martin Funderud, guitarists Vidar Ermesjø and Mats Funderud, bassist Ian Slemming, and Mitch Rider on drums, take no prisoners nor do they have any qualms about trampling upon and abusing the senses and sensibility from song titles and lyrics though to the pillaging riffs and bile soaked intense sounds. It is not an easy experience for the ear but what violent pit borne and destructive intrusion is. 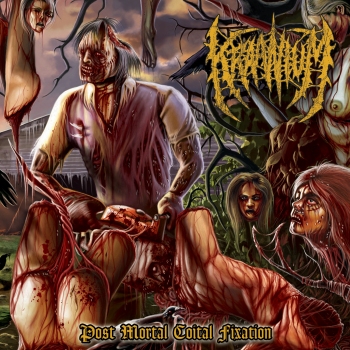 Fixation before flaring up with the brutal might of Stillborn Neurotic Fuck Feast. The track paces and tests limits with its flesh stripping riffs and the porcine guttering of frontman Funderud. Heavy, stripped down, and laying waste to the senses the track shows the band back to their formidable best after for many an arguably less than satisfactory second album.

The album is not openly adventurous nor the bringer of great diversity within its muscular hide but with infectious intestines of grooves and disengaged caustic melodies the release does not fall deeply into over whelming similarity either. The likes of Bursting Rectal Sores, the consumption of light that is Crack Whore Pounding, and the hypnotic and malicious Coprophagial Asphyxiation and one of the rare times bassist Slemming is plainly heard, all seek and fill every corner of the senses and thought with vile yet mesmeric vehemence.

As further tracks like the excellent Slammed Kranial Remains and Baptized in Boiling Sewage with its acidic grooved putrescent crawl consume, the album sucks the last essences of life from the senses, leaving dried up husks of depleted feelings and emotions. Post Mortal Coital Fixation is not for the faint hearted or for those needing warmth to their music. It is a plodding inhuman aural savagery that is as primitive and cruel as the hell it is inspired by, it is also in its sadistic way quite contagious and an overall rewarding malefaction.

Also including a cover of the Abominable Putridity song Entrails Full of Vermin, the album is a release to fire up all lovers of death metal, metal core and of course slam death. It is unlikely to make the majority of lists of 2012 top albums but it more than satisfies the needs of extreme metal fans as well as declaring Kraanium back on course.