As the windows and doors to your thoughts, emotions, and soul are blasted and virtually shaken off their hinges by Empathy the new EP from Belgian post hardcore band Campus, you know this is one release you are not going to forget in a hurry, or want to. Empathy is immense, a sonic wind tunnel of intensity and aggression veined with inspired invention and melodic enterprise. The enormity of the EP is clear as one lies on the floor grasping for a new breath to chase off the numbness that pervades every sinew as the release signs off from its deeply satisfying four track obliteration of safety.

Released May 28th via Small Town Records, Empathy is destined to ignite passions within a great many more than ever before. With a sound which has traces of bands like Architects, Underoath, and While She Sleeps to its formidable and imaginative creation, the release is the next step on the quest to conquer far afield from their already worshipping homeland. The EP follows their thoroughly acclaimed 2009 album Oh, Comely! which itself followed a well received debut two years before in We Are The Silence. That initial release led them to opening up the Belgian leg of the Taste of Chaos tour of the same year and saw them share stages with the likes of The Used, Rise Against, Aiden and Gallows. Since then they have not looked back as shows and tours with the might of bands like Alexisonfire, Cancer Bats, Parkway Drive, Bring Me The Horizon, Underoath, and Architects filled subsequent years as well as numerous festival appearances.

It is probably fair to say outside of Belgian the band has still to find the heights their music deserves but with an impressive appearance at the Hit The Deck Festival in the UK this year, slots at the Burnout Festival, Hevy Festival, and Skatefest upcoming and most of all with Empathy this feels like the point the rest of the world takes notice.

The release opens up with the title track and within seconds has the senses reeling. As the rhythms of Josse Wijckmans 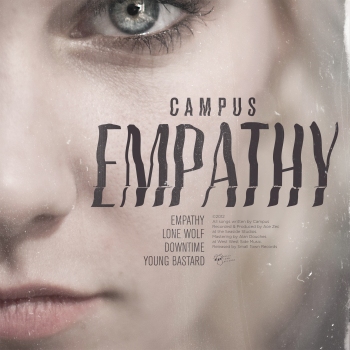 pummel the ear hungry growling riffs prowl with a predatory intensity and overwhelming energy. Vocalist Martijn Leenaerts scowls and unleashes pure venom to match the tumultuous attack. His delivery is persistently varied and an example to many other same genre frontmen that mixing up things is a mighty tool. The guitars of Tijs Mondelaers and Fabrice Parent strip flesh with the sharpest of harsh riffs and energy whilst mesmerising with a melodic invention that leaves blisters seething within the ear. They are openly impressive and again show that thought and diversity can be a weapon of the greatest devastation.

From an impressive start the band raise the bar with Lone Wolf, another track to fly from first note with rampaging energy and dehabilitating effect. As with the first song bassist Tuur Geeraerts is a growling vehement presence bringing the darkest shadows and depth to the songs. Abrasive and provocative the track riles up more than the ear and leaves the first search for air an urgent need.

Downtime is a lumbering brute of a song, its heart, pace, and towering muscle the heaviest on Empathy. It does not neglect the other elements the band does so well neither, offering an impatient groove to wind around the ear with a grip borne of spite and melodic craft to light up the skies of the song like meteor shards, white hot and violently incisive.

The EP closes with the best song within its angry walls in Young Bastard. All the great things that preceded it return in greater heart and intensity. Vindictive, the aggression is lifted to its greatest heights leaving the senses ringing out for mercy and relief but wanting more and more of the same. Within this synapse melting the song explodes with the most infectious groove and clean vocals to ignite flames of primal energy. The track reminds of Red Tape with a twist of Ghost Of A Thousand at times and is easily one of the best tracks heard this year.

If Campus does not breakout to infect the world with their great sounds then justice has never had a place in music but with Empathy the feeling is their time is just shifting up multiple gears. https://www.facebook.com/CAMPUSBE