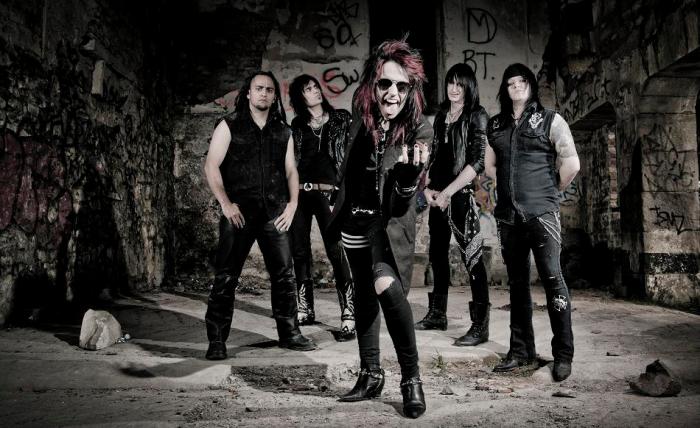 For all those with a fervour for the likes of Black Veil Brides, Duff McKagan’s Loaded, Backyard Babies and CrashDiet then new rock n roll rebels Peepshow will be right up your eager veins, even more so if you like a good twist of the likes of My Chemical Romance, Wasted Sinners and Motley Crue to spice things up. Juices dribbling from the corner of your anticipation?…then the new album from the band, Brand New Breed is ready to satisfy.

Brand New Breed is the follow up to the self released and acclaimed debut album from the Scottish quintet of vocalist Johnny Gunn, guitarists Rusty Gill and Dagan, bassist Hex, and Hammy on drums. From its success and praise the band moved on to supporting the likes of Duff McKagan’s Loaded, Backyard Babies, and CrashDiet, an obvious natural and ultimately successful fit. The latter of the three bands were so impressed that they had Gunn co-write three songs for their most recent album Generation Wild.

Having to date not heard their debut, we have been reliably informed that Brand New Breed moves their sound on to a 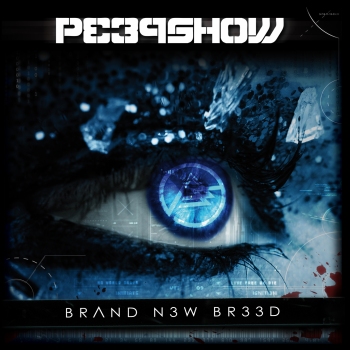 fuller and more mature level without losing their eager and irrepressible energy and attitude. Less antagonistic and more melodically driven too has been mentioned especially with the addition of keys to their sound bringing a slightly more symphonic and expansive feel. What is evident is the new album is an insatiable feast of rock music which leaves no one in doubt of the adrenaline driven energy and craft it is borne from.

From an atmospheric awakening intro hailing something striking and formidable approaching, which many bands are now employing in differing styles it seems,  the album erupts with the first single from the album Let Go, an impressive and irresistible opener to excite and rile up senses and emotions. Its electro start does not quite reveal the energised attack to follow though the band soon put that right as the fine vocals of Gunn lay satisfying upon the ear. There is a slight Wednesday 13 edge to his vocals though the smoother bulk of his delivery sets him apart and ahead of most . With riffs pumping up the blood with great power and the rhythms of Hammy firm without being combative it is an instant highlight to the release.

Live Free Or Die swoops in straight after with equal satisfaction.  With pure anthemic power and a muscular hard rock vein the track leaves one struggling not to join its call. The keys sway within the stiffer aggression adding acute warmth to the insistent song. The track chugs like a veteran rock song whilst bristling with fresh and youthful exuberance making an infectious pleasure something the description and result can be placed upon the following excellent Trouble. Arguably the best song on the release it lights up the ear with sharp melodies and an acidic solo that leaves sparks in its wake.

Peepshow is unafraid to and are skilled at mixing things up in sound and delivery too, with the likes of the stomping classic rock fuelled Only A Dream,  power ballad Feed On Me, and the full emotive slow burner Irreversible, showering the ear with strong and varied creativity. The third of these is a masterful display from Gunn, he is a vocalist that will light up many songs and hearts over the time to come.

With more powerful songs like Suffer, the outstanding and contagious title track with a bass from Hex to make knees buckle, and the belligerent Waking The Dead, bringing the album to a close it fulfils all needs from the senses from start to finish. Muscular without being destructive and catchy without losing credibility, Brand New Breed is a fine and pleasing album that will find an eager swarm of hands and ears heading its way upon its release on May 28th.

Peepshow does  not make the kind of music that gets first choice on our daily playlist but with Brand New Breed they might just change that.