Actions! : South Of The Water single 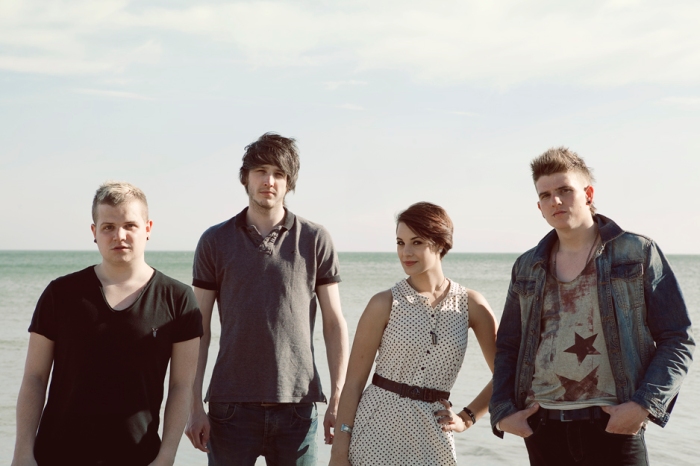 Since receiving the promo for the debut single from UK power pop band Actions! the band has announced its demise due to personal commitments of its members. Despite this South Of The Water is easily worth checking out as the band bid their hello/farewell on a bit of a bang rather with two songs that displays much promise for what one suspects could have been a rather notable pop punk styled band.

The band started in the opening weeks of 2011 though bassist Mat Wilson and guitarist Ryan Stuart had played together from Year 9 in school and alongside drummer Laurence Mosley since 2008 when he jammed with their previous band. With the addition of vocalist Emily Cracknell last year Actions! became a complete and focused entity.  Taking open pop punk influences from the likes of Blink182 and Amberlin as well as the pop styling of a Jessie J and Pink the quartet has developed a sound which is tight, energetic, and eagerly accessible,  the single suggests the band were still yet to find their completely distinct sound but with rhythms that pump up the blood, guitar melodies which easily draw attention, and the excellent rich vocals of Cracknell  the band was easily one of the more interesting and promising pop driven rock bands to emerge in the UK, as successful supports slots with bands such as Inme, Skindred, Paige, and Not Advised proved.

Released May 21st, the two songs making up the single were recorded  at the beginning of the year and more than

deserve firm attention  even if the band are no longer a breathing creature. The song South Of The Water opens with a slow enchantment from the appealing and impressive vocals of Cracknell with a subtle melodic guitar in company. As the emotive bass of Wilson steps into view with the firm and punchy beats of Mosley alongside, the song spreads its wings and pulls one into a vibrant blend of impassioned guitars and flavoursome guitar driven rock. It is Cracknell that lights up the song most, her delivery and great voice well formed and captivating. The song does not explode within the ear but swarms around and warms up the senses with a fine all round display of craft and intent.

The second track on the release is a more direct pop punk energised pleasure. One Minute Smile dances and beckons with simple riffs that spark and again excellent vocals which lead every aspect of the great song with an assured belief and confidence. As with the first the song does not stand atop a hill of originality but satisfies and entertains with an accomplished ease and ability which is just as full and pleasing.

With essences of Paramore as apparent as previously mentioned references the band fit alongside the likes of Me & The Mountain and Hitchcock Blonde in promise, sound, and creativity. That promise is strong and unmistakable from this their debut and departure so it is a shame we will not get to watch and hear a great band evolve into one suspects would have been something even more special.

South Of The Water is a fine single that deserves plenty of attention and will leave many upon hearing it with disappointment that this is all we have from Actions! to enjoy.