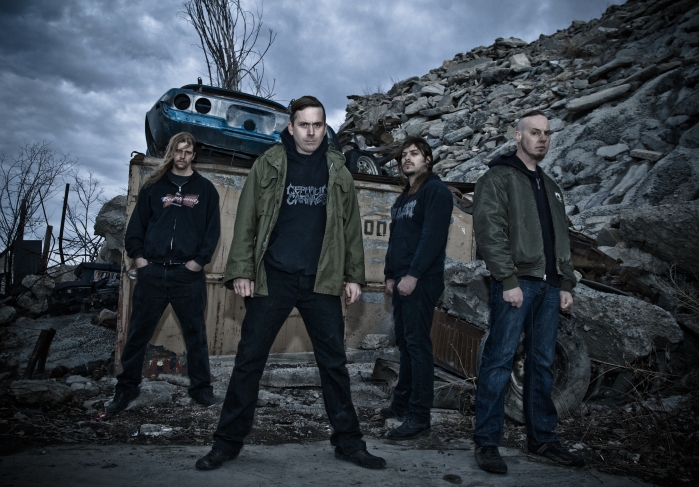 Without having a full and firm knowledge of the career and previous output of Californian death grinders Cattle Decapitation, there is still a feeling that it is not too far from the mark to claim their new album Monolith of Inhumanity is up there as possibly the best thing they have unleashed upon. The album is immense, a towering brutality that takes all that the band is known for to a deeper and harsher level whilst stretching themselves and the genre with an incisive invention and inspired originality. With previous album the excellent The Harvest Floor as the main reference to compare the new album with, there is a further defined intention and realisation on the new album to bring not only the aggression and combative directness but also themselves and their music as a whole into new and imaginative avenues.

Cattle Decapitation have not veered sharply away from the intense and dehabilitating extreme sounds they have been known for and cultured since their beginning in 1995, in fact they have turned that aspect up to flesh searing and bone snapping heights. Into this though they have brought irresistible melodic insertions, groove fuelled hooks and lures, diverse vocals, and multiple infectious invitations unlike anything the band has created before. These are used subtly and sparingly but when used they bring something special to the visceral decimation going on all around. Monolith of Inhumanity is outstanding and makes being punished by its limitless violence a pleasure.

Engemann in songwriting and recording. Joining vocalist Travis Ryan, guitarist Josh Elmore, and David McGraw on drums and alongside producer Dave Otero (Allegaeon, Cephalic Carnage), together they have spawn an album which lives and breathes to annihilate the senses as it brings through its concept of where humanity will end up if it continues its current course. From the moment the opening track The Carbon Stampede swarms around and bears its heavy vindictive weight upon the ear you know Cattle Decapitation have not lost their might and viciousness but have increased it with relish. The track rages like a furnace as the riffs splinter the sinews holding the ear in place whilst twisting the senses into a defenceless molten obedience. It is a devastating start still only suggests the greater things to come.

The darkly grinning bass of Engemann in the following Dead Set In Suicide alongside devastating rhythms from McGraw send bestial claws straight into the soul but it is the impressively varied and contrasting guttural gratings of Ryan with presumably his own high higher pitched demonic chorus which whips the song to be an immediate highlight. With riffs puncturing the body like offspring from a semi-automatic and melodic guitar play as sharp as cheese wire the track is enormous.

The album though just gets better and better, from the consuming vehemence of A Living, Breathing Piece of Defecating Meat with more brilliant diverse vocals and …well, just about everything, through the spiteful deeply intrusive Gristle Licker with a groove that opens up in the latter stages as demanding and additive as heard anywhere, to Lifestalker a track which almost breaks out initially into a wanton grooved swing attack until its bestial heart reasserts itself, the quality simply rises and rises.

The best is saved to last though with the trio of tracks Do Not Resuscitate, Your Disposal, and the closing Kingdom Of Tyrants. The first of the three turns the senses into a splatter board for the debris from its uncompromising intrusions of blistering riffs, acidic invention, and ravenous vocals. As shown everywhere the production allows each member to express their individual agenda and malice to bring a fuller and open but no less titanic assault from Cattle Decapitation. Your Disposal is the best song on the album, bringing all the best elements on the album into one rampaging maelstrom of intensity, violation, and ingenuity. It is like being in the middle of a charnel pit as your skin and bone are flayed by the sounds.

Kingdom of Tyrants is equally impressive and unpredictably imaginative, the perfect creative and destructive end to an outstanding album. With essences of the likes of Carcass, Dimmu Borgir, and Cannibal Corpse spicing up their own distinct death, grind, and what is at times melodic black metal, Cattle Decapitation have let loose one of the best extreme metal albums in a long time. Monolith of Inhumanity will leave you on your knees and devoid of feeling but most of all it will leave you fully satisfied.