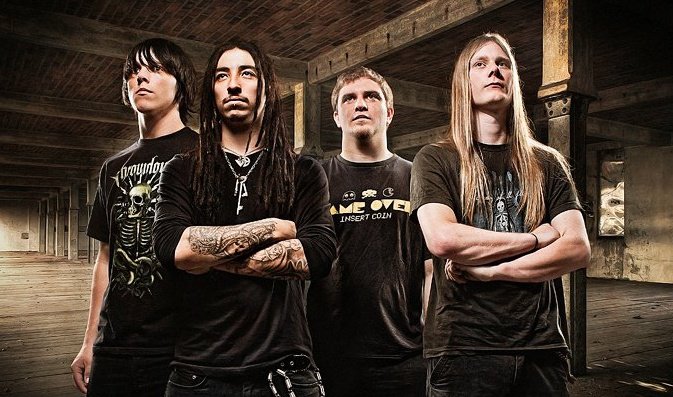 Though it was released the tail end of last year the recently brought to our attention EP Last Rites from UK metallers Cambion is just so good that a sharing was a must. Without breaking down boundaries or driving into new areas Last Rites is a full and muscular pleasure that brings an extra fresh breath into an already lively flurry of emerging UK metal bands. Cambion have something extra though not something which can be pinned down but their music just rips through the senses to invigorate, light up, and bring them wonderfully to the boil. They just bring a maelstrom of raging aggression, skilful technical accomplishment, and simply heart lifting uncompromising metal.

Formed in 2009, the Devonshire band openly state their influences and start their sound with seeds of the likes of Fear Factory, Meshuggah, and Divine Heresy. There is much more to their sound but you can hear those inspirations within the five songs that make up Last Rites. The year after forming saw the band on tour with Fozzy and in 2011 Cambion played a return performance at Wizzfest in Belgium alongside Blaze Bayley. That year also saw the release of their second EP City of Ember as well as new members, bassist Colin Beale and rhythm guitarist Liam Neary joining drummer Frank Dennis and lead guitarist/vocalist Elliott Alderman-broom. With the band in their time also sharing stages with the likes of The Defiled, Malefice, Fury UK, and Beholder, they have become as shown by the EP a tight and formidable band which deserves being placed at the fore of the new metal blood coming through.

The EP opens with the muscular rampaging Death March. The track rifles the ear from the start with threatening riffs, concise guitar asides, and growling venomous vocals. The song is a towering aggressive animal which breaks down any resistance with its deliberate and intense drive. Midway the song steps back in pace as a wonderful solo lights up the darkened corners of the song but it is not long before the insurgent rhythms and barracking riffs resume control. The song is a strong start to the release if not the most remarkable but it is impossible not to be swept up in its overpowering force.

The following Jester steps up a gear adding a fine groove metal vein to the assaulting riffs and intensity. It is with the excellent clean vocals though alongside the sharp melodic play that one is openly shown just how good this band really is. That previously mentioned undefined essence a sure presence as the track wraps its intrusive manipulative groove and touches around the ear tightly. There is a mix of Malefice and Periphery that come to mind as the track plays though  just  strong spices to their flavours.

It is with Quantum Concept and Salem that the release really ignites all the inner sparks. Both tracks are immense and as satisfying and intriguing as they are intense and consumptive. The first brings its Meshuggah incited elements to the forth to puncture and persistently jab the senses with tight and eager riffs, whilst alongside there are crystalline melodic strikes which mesmerise. The rhythms from Dennis are immense showing him , as do all the tracks, what a masterful and inventive drummer he is, the driving force for the songs but with an intelligence and imaginative flair. Salem is the best song on the release though a close call between them all. It stomps and grooves with a devilment that rides the intrusive spikes of sound which the track pitches into the senses. It is like being plugged into the mains listening to it as it forces a hyperactive response to its violations and a mesmerised addiction to its caressing melodic and harmonious play and vocals.

The closing Virus Pt.2 The Infection is a bristling pulsating metal mix offering a Fear Factory industrial tone and a scraping Static X electric intensity. As it stirs up the senses the song adds a melodic progressive metal side step which shifts the song into a warmer feel before returning to rupture the senses once more with direct and manipulative  strikes.

Last Rites is excellent , simple as that. It not only hits the spot and gets the blood flowing in a torrent it declares Cambion as one of the most impressive emerging UK metal bands and one to watch very closely.