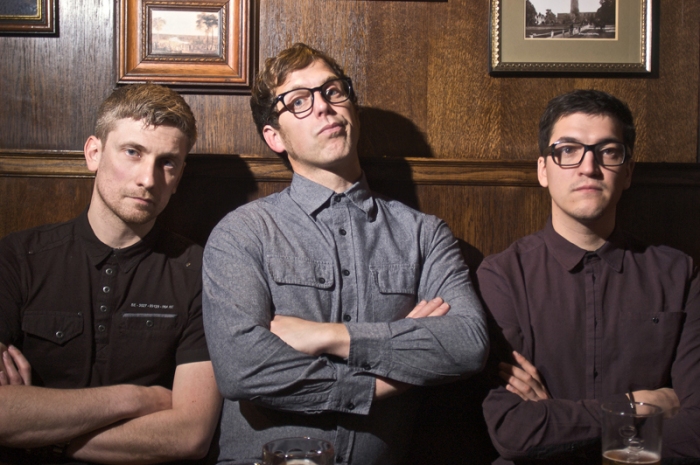 To be honest when the songs from the outstanding debut album from UK indie rock band Black Hats graced the ear there was an instant thought it was a new release from Young Knives even though the CD said differently. As Austerity for the Hoi Polloi unveiled its full might and collection of infectious and striking tracks there was obvious that there was much more going on within the songs but there is no mistaking that the band which came to mind first is a big influence to Black Hats, which can only be a good thing.

From Oxford, Black Hats consists of Ian Budd (bass, vocals), Nick Breakspear (guitar, vocals) and Mark Franklin (drums, vocals). Eighteen months or so as a band has seen them consistently and increasingly grab attention as they unveiled new songs, grabbed radio play including a live session for BBC Introducing (Oxford), and released their first EP Magnets. With the release of their debut album Austerity for the Hoi Polloi, one can only see bigger and more urgent things coming to hound and throw acclaim at their door.

As the opening guitars shower the ear with crystalline melodies, first track You Make Us What We Are immediately 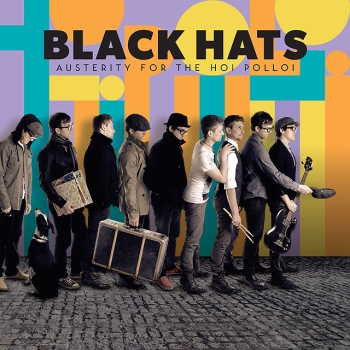 has the ear offering full attention. With a slight ska lilt to the riffs the song pokes and insists the senses take notice as a delicious dark bass line meanders wonderfully through the centre. It is very Young Knives which made the double take at first but as the song plays and captivates more and more the distinct and different qualities of Black Hats is easily apparent. The song never ignites into a full out frenzied party but borders it closely to make a song which is deeply engaging and openly infectious.

Death By Record bounces in next with a punk urgency and inspired melodic mesmeric teasing. Checking into the band before writing the review there were quite often comparisons with Gang of Four mentioned which the first song never suggested at all which had one wondering where they were coming from. Here there is a definite feel of that band which spices the flavoursome song, to which you can add essences of Maximo Park and Baddies too. By this point an affair with the inspired basslines of Budd has been nurtured, his reggae grooves and punk moodiness an easy and impressive meld.

Already the album is destined to only acclaim which Blood And Space with its jazzed bass invention and thoughtful structure only enforces and the following and amazing Impossible View ensures is an even greater affection. The best song on the album it is instant addiction. The rhythms of Franklin cage the sirenesque melodic conjurations which light up the ear and beyond. Breakspear and Budd dazzle with inventive play and the sax that strikes ingeniously is glorious. With its ska lined riffs and rhythms alongside its indie pop heart the song is a full pleasure.

Impending single Fall Out and current one Kick In The Doors complete the album just as impressively as up to this point. The first is another ska riffed, dub beat spined feast of post punk power pop. A mouthful but it brings it all into its excellent vibrant body. The closing Kick In The Doors with its acidic striking keys clasping and squeezing the consistently striking guitar and bass invention leaves one as the release ends simply breathless and with no option but to dive right back inside Austerity for the Hoi Polloi again. To be honest any song would be the perfect entry point into Black Hats but this track certainly scoops one up welcomingly in its irresistible arms of intelligent and articulate pop-punk.

Normally when a band reminds of another as closely as Black Hats did initially there is a doubt about them but this trio soon put all those thoughts firmly away with their skilled, inventive, and completely absorbing impressive sounds. There is a new energy for indie music starting and it is in the shape of so pick up Black Hats and their simply wonderful EP Austerity for the Hoi Polloi.