Heart of a Coward: Hope & Hindrance

Two years in its creation Hope & Hindrance the debut album from UK metallers Heart of a Coward has been the focus of much eager anticipation. The media and fans alike have been waiting with at times a less than patient gait but the mightily impressive release more than justifies the saying that all good things come to those that wait, and does it with a formidable and explosive collection of bruising anger fuelled defiant and intense tracks.

Formed in 2007 the Milton Keynes based quintet of guitarists Carl Ayers and Steve Haycock, bassist Vishal V Khetia, drummer Christopher Noddy Mansbridge (ex-Enter Shikari and Fellsilent), and ex-Sylosis vocalist Jamie Graham, has fired up much attention and enthused acclaim for their muscular mix of groove metal and metalcore through their live shows, an early demo plus the Collisions EP both 2008, and The Dead Sea EP the following year. It is arguably with the addition of Graham and Mansbridge last year to the band that interest rose even more acutely to ensure an eager definite waiting audience for this first album. 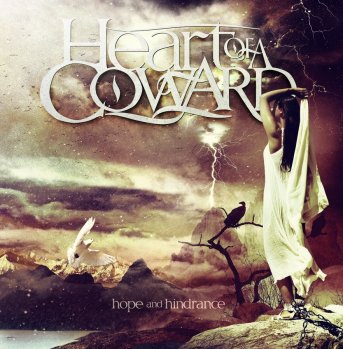 through to closing intense cranial investigation of Break These Chains. The album challenges and consumes the senses with tumultuous riffs, technical skill, and ingrained melodic grooves that attach themselves with a compulsive attraction. It is testing and provocative but equally inspiring and infectious. As the opening song also shows the album and band is strikingly inventive. Motion descends on the ear from distance as it invites itself in to then  explode into venomous and  acidic melodies that drip from the violent intent that spines the song. With technical intricacies spawn from the likes of Meshuggah and Uneven Structure the track manipulates and convinces submission whilst the vocals of Graham passionately growls and aggressively spews out lyrics that are as caustic and invoking as their delivery. The balance the band brings between the intense nature of the music and the intelligently crafted progressive and melodic technical invention is perfect making each song a rounded and fully satisfying experience.

As the album moves through its slices of stirring tracks it twists and turns constantly making for a release that is varied and never predictable. From the excellent All Eyes To The Sky with its thoughtful and emotive melodies, the wonderfully abrasive Nightmare, to the Deftones flavoured Light, the album leaves one searching for cover but equally breathless and grinning from the pure power and striking craft that pours from each song. The third of these three songs is a slow brooding creature that consumes with a  dark grace whilst veined with a building ominous tone which is never allowed free rein at any point. The track is majestic and an inspired break from the raging intensity elsewhere.

It is hard to pick a highlight from this persistently high quality release but Around A Girl (In 80 Days) definitely makes a good shout for it. The song plays against and with the insidious intensity that takes the ear by force with smoothly compelling vocal and warm yet sharp harmonies. As always there is never a moment of complete safety from the adversarial intent and sounds but the band knows how to temper this with imaginative skill as the corrosively urgent We Stand As One shows.

Hope & Hindrance is an excellent album that endorses and elevates all the hopes and expectations that were laid before its arrival. Heart of a Coward has stated with strength and the undeniable proof of their album that they are a band that should and surely will become a major part of UK metal.