Lion Splicer is a duo from New York City and a band which creates sounds to accost the ear from a very welcome mischievousness and unbridled eagerness. The pair of brothers, 20 year old Max Splice (lead guitars, bass, and vocals) and 17 year old brother, Danny Splice (drums), make music that is metal based but with ruptured veins of garage punk and filth coated rock oozing within its urgent depths. Combined it makes for rock that pumps up senses with an intensity complete with a wicked glint in its eye and drooling thick enthusiasm dripping from heavy mud coated lips.

Recorded in New York at Little Mouse With A Big Cock Studios and mixed over in the UK, in Bath by Nathan Long, the three track Valkyrie EP is a fore taste of the debut album from the pair later this year. The three songs on offer more than instigating an intrigued and eager wait for the full length release whilst giving an enthused satisfaction of their very own. 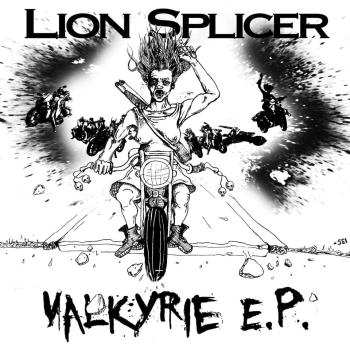 thrash, metal and garage punk senses stomping mayhem.  The song also has a seventies vibe thrusting the song forward with a heavy rock intent. Guitars cruise the ear like belligerent gang members whilst riffs lay waste as their heavy artillery and the drums punish with devilment in their wind. The song as the EP itself has no intentions on marking new territories for music but just wants to party and bruise its recipients with straight forward satisfying rock n roll.

Next the duo unleash a cover of the Yardbirds song Train Kept a Rollin’ complete with scorched guitar solos and a mustiness that consumes and envelopes nicely. As with its predecessor the song transports one to a seventies imposing bar scenario, all eagerness and blurred definition that is a treat. Featuring the additional vocals of Saman Rouhani and guitar from Nathan Long, who also adds the same on the closing Sector 7, the song is just an enjoyable boisterous aggressive lined romp, a comment one can happily apply to the whole release to be honest.

The Final Fantasy VII inspired Sector 7 (Return to Reactor) closes the release and is a classic metal toned piece of thrash fuelled metal. The track rumbles through the ear with ease and instant appeal, its riffs flexing like pecs whilst the guitars lay a wanton sizzling blaze across the senses. The progressive feel it adds is a seamlessly added pleasure as is the closing diversion into an indie punk aside that lights up the heart with quality invention and hypnotic play. All songs should have hooks and imagination this easy to feast upon.

The Valkyrie EP is a joy which is only stopped from being something really special by the production. Apologies if the intention was to have a fog bound claustrophobic feel to the release but it only goes to hamper what are very impressive and enterprising, not to forget pleasing songs.  Hopefully the album will be more open and have a clarity missing here. Nevertheless Lion Splicer have still brought a release that is irresistible and an impressive invitation for their full length debut in a few months time and best of all it is free so go grab the Valkyrie EP @ http://lionsplicer.bandcamp.com/album/valkyrie